Today we’ll review a Forex robot kit which consists of two EAs: Trader’s Sun EA and Trader’s Moon EA. These robots have been on the market for more than 4 years already and have shown a stable profitable performance.

Follow this article to get more detailed information about the logic and performance of these EAs.

Each of the EAs of the FXTraderKit has got one live Myxfbook trading account with an open real performance trading statistic. The EAs are able to trade on a large number of currency pairs. Trader’s Sun EA can trade on EURUSD, USDJPY, EURCHF, AUDCAD, USDCAD, EURCAD, AUDNZD pairs, while Trader’s Moon EA trades on AUDCAD, GBPAUD, AUDNZD, NZDCAD, EURCHF, EURGBP, EURSGD, GBPCAD currency pairs.

The real statistics of Trader's Sun EA have been live since March 2016 while the statistics for Trader's Moon are able since December 2018. Both EAs separately cost the same $269 but if buying FXTraderKit the price for both robots together is $405.

The Trader’s Sun EA has been able to make 338.05% of profit since it started working live in March 2016. At the same time, the max floating drawdown on the account that’s been fixed by Myfxbook is 27.82%.

As we can see from the graph below, the EA shows an upward move almost without long drawdowns and losses, but at the same time, the upward movement does not look like straight growth. It looks more like the slow flat growth of a safe-trading system.

Having 56 months of trading and all the mentioned numbers of gain and drawdown the average profit/drawdown ratio of the Trader’s Sun EA is not quite impressive – 0.21:1. It just confirms the fact that the robot trades safely with low risk. It is also what the developer says about the robot:

“Trader’s Sun is aimed at both beginners and more experienced conservative traders and investors, who adequately assess the risks of Forex trading”

If speaking about the Trader’s Moon EA trading results, we have to mention sharper upward curve move almost without the sagging of the statistic. The EA has made 199.91% of gain in just 23 months with the highest floating drawdown fixed by Myfxbook of 41.35% (look on the screenshot below).

Talking about the drawdown level of this EA it is worth saying that the official Myfxbook stats look a bit exaugurated as it does not look the same if we look at the following stats sheet, which shows only 26.28% as the max floating drawdown (the screenshot below).

Considering all the numbers of the gain and drawdown levels together with not that long trading period, compared to the Trader's Sun EA, the Trader's Moon EA has a better profit/drawdown ration of 0.33:1, which is still not as high as we can see in some different Forex robot’s statistics.

Besides, the Trader’s Moon and Sun EAs show stability and no fixed deep drawdowns or stop losses during more than 4 (for Sun EA) and 2 (for Moon EA) years of trading. Even though the gain/drawdown ratio is not high it still should be said that the systems are profitable and (what is more important) safe and stable. The absence of sharp downward moves on the statistic graph indicates that these robots really stick to the conservative-trading philosophy which is described by the developer on the product’s website.

Trader’s Sun and Moon EAs are 100% fully automated systems with different approaches to trading. The Trader’s Sun EA strategy is explained by its developers this way:

“The strategy of the EA, embodied in the algorithm, is based on determining support and resistance levels, as well as identifying the behavior and direction of the Market's movement, to assess the strength of the movement impulse and the probability of its continuation. Trading from levels is formalized and supported by fundamental factors.”

As we can see from the chart below there are no signs of Martingale or hedging strategy since we do not see a lot size rising together with the grid sets or even grids without lot-size rising which confirms developers’ statement. There are also no signs of averaging for the same reason. 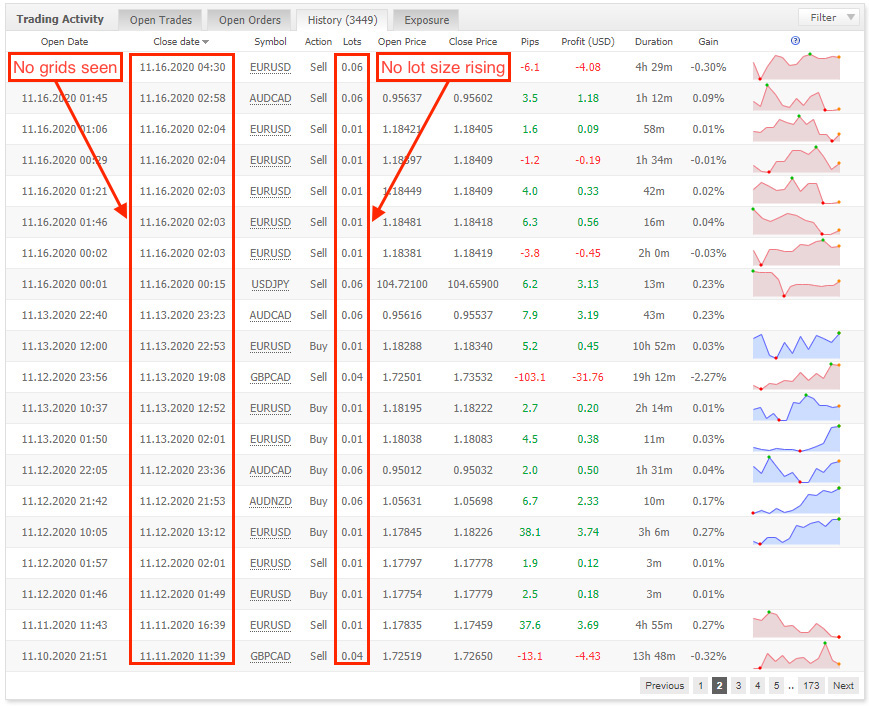 As for the trade’s duration, if analyzing the statistic, it also matches the developers’ description. As we can see from the graph below the average trades duration usually is in a range from 1 minute to 5 hours.

The EA trades pretty often. Trading statistics of the Trader's Sun EA show that the robot has already made 3422 trades since the beginning of its live trading, which means that the EA has been closing two trades per day every day since 2016. There are a few currency pairs that Sun EA has been trading more often than on others: EURUSD, USDJPY, USDCAD, and EURCHF.

The Trader’s Moon EA has a different approach to trading than the Sun EA. It uses the Martingale principle

“Trader's Moon is an Expert Advisor that uses the Martingale principle, but with several significant improvements and benefits. The trading algorithm of the EA was written in MetaQuotes Language 4 by a team of experienced programmers. Trader's Moon is optimized using the "Tick Data Suite for Meta Trader 4" software package with a floating spread and simulation of slippage”

As we can see from the screenshot below the Martingale principle is quite obviously seen in the trading of this robot. The trades often close as different long grids with a slight increase in the lot size. 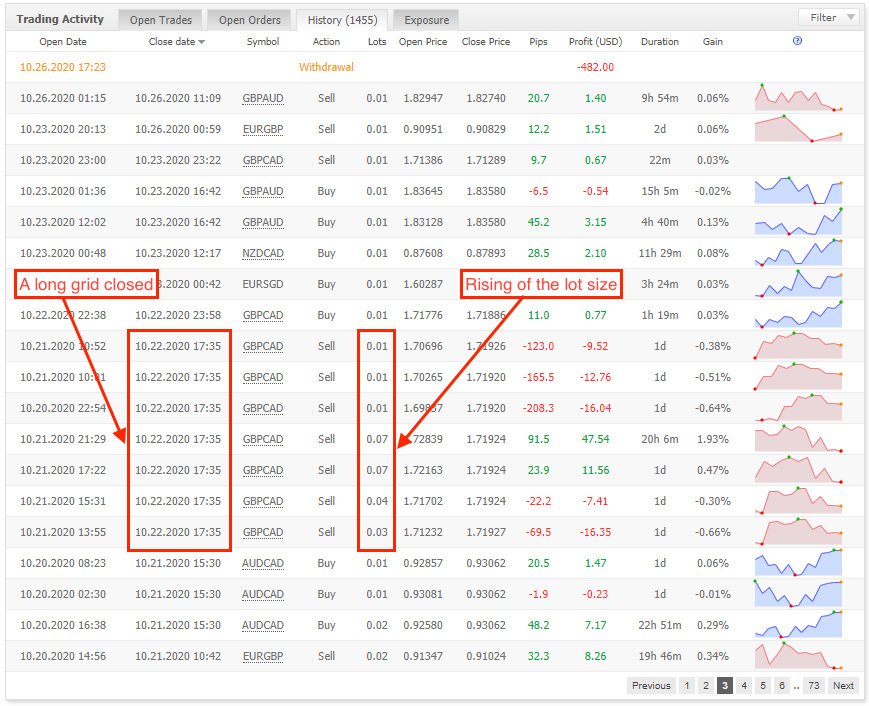 The EA opens positions based on searching for a signal using a series of indicators (Bollinger Band, Commodity Channel Index, etc.), as well as candlestick patterns. Trader's Moon EA uses filters of the number of open transactions, maximum drawdown, control of currency pairs, and news background. That allows to block the entrance to the Market at the right time and reduce an overall level of drawdown on the account.

Since the beginning of its trading Trader’s Moon EA has made 1443 transactions which means that the EA has been closing the average of the same as for the Trader’s Moon EA two trades per day every day since 2018. The average duration of the trades of Trader's Moon EA is in the range from a few minutes up to 24 hours. But as it is seen from the screenshot below sometimes trades could stay on the market for a longer time. By the way, mostly those trades are losing once.

Summarizing all that's been said, the Trader's Sun and Moon EAs have a different approach to trading but at the same time, they show very similar results. The EAs can trade on 13 currency pairs total on MetaTrader4 and MetaTrader5. Each of the robots has its own live Myfxbook trading account and backtests on different currency pairs and periods.

In its trading, the Trader's Sun EA does not use Martingale, hedging, or averaging. The strategy of the robot is based on determining support and resistance levels to identify markets' movement direction and to measure the strength of the impulse and the possibility of its continuation. The strategy of this robot is based on the fundamental analysis using a specific algorithm together with the number of indicators.

The Trader's Moon EA in opposite uses Martingale strategy opening sets of grids with the lot-size rising to cover losses of the previously opened orders that became loosing once. The robot opens positions based on searching for a signal using a series of indicators such as Bollinger Band, Commodity Channel Index, etc., as well as candlestick patterns.

Both robots make a lot of small trades within a short period. Trader's Sun EA average trades duration usually is in a range from 1 minute to 5 hours while the average trading duration range for Trader’s Moon EA is from a few minutes up to 24 hours.

So let’s finish this review by giving appropriate assessments to the Trader's Sun based on the analysis of its work, statistics, and other factors
Price VS Quality
5/5
Profitability / Drawdown
3.5/5
Statistics duration
5/5
Backtests
5/5
Authors’ rating
4/5
AVERAGE
4.5/5

Having no long drawdowns big losses or stop-losses since the beginning of trading in 2016 (2018 for Trader's Moon EA) the system at the same time has several backtests and a money-back guarantee which together with not that high price of 269$ makes me give it 5 out of 5 for this stat.

The profit/drawdown ratio of the EA is not quite impressive which makes me give it only 3.5 stars out of 5. But it is worth saying that even though the system does not make a great profit or has not the lowest drawdown level, still it makes money in its own a bit conservative but effective way, which is okay for the system that’s been built for exactly this purpose.

Statistics duration of this EA as mentioned is 23 and 56 months long for Trader’s Sun and Moon EAs respectively which is more than enough to say that the system is reliable and profitable for a long-term trading choice. With that being said I give it a maximum of 5 out of 5 stars.

Trader’s Sun and Moon EAs both have got a number of backtests made on 9- and 7-years long history quotes respectively which are fine enough to get 5 out of 5.

And I give this Forex robot 4 out of 5 for its stable work during 4 years of live trading, proper backtesting, not that high price, and an interesting approach to Forex trading. It still has the potential to grow and improve and I hope it will.

At the moment of writing this review, the automated rating system of the ForexStore rated Trader’s Sun EA 9.6 points out of 10 which is very close to the marks that have been given in this review. This Forex trading system for sure deserves your attention.