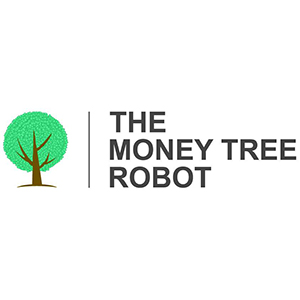 Information about The Money Tree Robot

What's included with your membership:

FULL SOFTWARE ACCESS
You will get full access to the The Money Tree Robot all best settings that we use are built in. There is no adjustments needed.

DETAILED SETUP GUIDE
You will get a clear, detailed manual with instructions, graphics, and best recommendations.

FULL CUSTOMER SUPPORT
If you need help at anytime we will expertly assist you along your journey.

FREE LIFETIME UPDATES
Although the updates are rarely necessary for this trading style. We do provide you with free updates for the life of the software as they become available.

The Money Tree Robot is one of the newest Forex robots produced and represented by the LeapFX company, which shows high results so far. In this review, we’re going to break down the live trading performance of this Forex robot. Read the following review to get additional information about The Money Tree EA.

Basic information about The Money Tree:

Live performance of The Money Tree

The developer of The Money Tree Robot provided us with one live trading performance account by the third-party company Myfxbook. The Money Tree Robot trades using an incredible number of 18 currency pairs such as AUDCAD, AUDCHF, AUDNZD, AUDUSD, EURAUD, EURCHF, EURGBP, EURJPY, EURNZD, EURUSD, GBPUSD, NZDCAD, NZDCHF, NZDJPY, NZDUSD, USDCAD, USDCHF, USDJPY. The results of trading using all these currency pairs are available on the official Myfxbook account of the system. The Money Tree Robot has been trading live on the real account since the beginning of February 2022, which gives us only 4 months of long statistics.

Considering the duration of the live trading accounts statistics, the results look pretty good. The Money Tree Robot reached an amount of 1002% of the profit on the live account. The statistics graphs of The Money Tree EA look clear and sows no downward movements, the main trend is upward, and the profit also confirms this.

There are no backtests made by the MT4 Strategy Tester for The Money Tree Robot, and no other kinds of backtesting are available on the official website of the robot.

The Money Tree Robot is another development of the LeapFX seller which goes along with other robots that we’ve already reviewed before, such as The Fund Trader, Trade Explorer, DynaScalp, Stealth Trader, and Bounce Trader.

As usual for LeapFX developments, The Money Tree Robot is available for sale in two purchasing options -

Both options include the following features of The Money Tree Robot:

The Money Tree Robot is made to trade with a huge number of currency pairs - 18 currency pairs (AUDCAD, AUDCHF, AUDNZD, AUDUSD, EURAUD, EURCHF, EURGBP, EURJPY, EURNZD, EURUSD, GBPUSD, NZDCAD, NZDCHF, NZDJPY, NZDUSD, USDCAD, USDCHF, USDJPY). It uses a 15M timeframe, and it is compatible only with the MT4 trading terminal. There is no recommendation given by the developer on the minimal leverage size for The Money Tree Robot but according to the official statistics of the EA, we can see that the developer chose to use 1:200 leverage which might be the recommended one.

There are some clues given by the developer of The Money Tree Robot to understand the trading logic and algorithms included and programmed into the EA. Usually, LeapFX gives almost no information about the inner logic of their robots, but it seems to be changing, which is a good signal. Foremost, the developer declares that The Money Tree Robot does not use a grid and hedging in its trading. There are no statements about Martingale's strategy, so it probably might be used. We'll try to see if it is true by analyzing the trading graphs of the EA. Anyway, there is more information about the system given by the developer.

First of all, it is declared that The Money tree EA uses Dynamic Trailing System or DTS (Dynamic Trailing Stop) which is usually used as a “Smart Stop” technology that identifies consolidation and pinpoints support and resistance levels. Basically, it is used ​​to protect gains while minimizing risk. In addition, the robot also uses a combination of custom volatility filters and custom moving average filters. There is no detailed information about the exact filters and indicators used in the live trading of The Money Tree Robot but still, there is some touch of understanding of the potential technologies used in the robot.

Moving on, we come to the trading statistics analysis. And to begin with, let's mention that the developer hid the lot size numbers from the live trading charts, so it will complicate the analysis a little. Anyway, the first thing we can see about the live trading of The Money Tree Robot is that the system uses a fixed number of pips taken by the average winning trade. The amount of 10 pips is pre-programmed for the system as a take profit level. It has not been changed since the beginning of live trading, but the profit amount per winning trade has increased significantly, which signals the lot size growth through time. This leads us to the conclusion that The Money Tree Robot uses the compound interest to grow the account (look at the screenshot below). 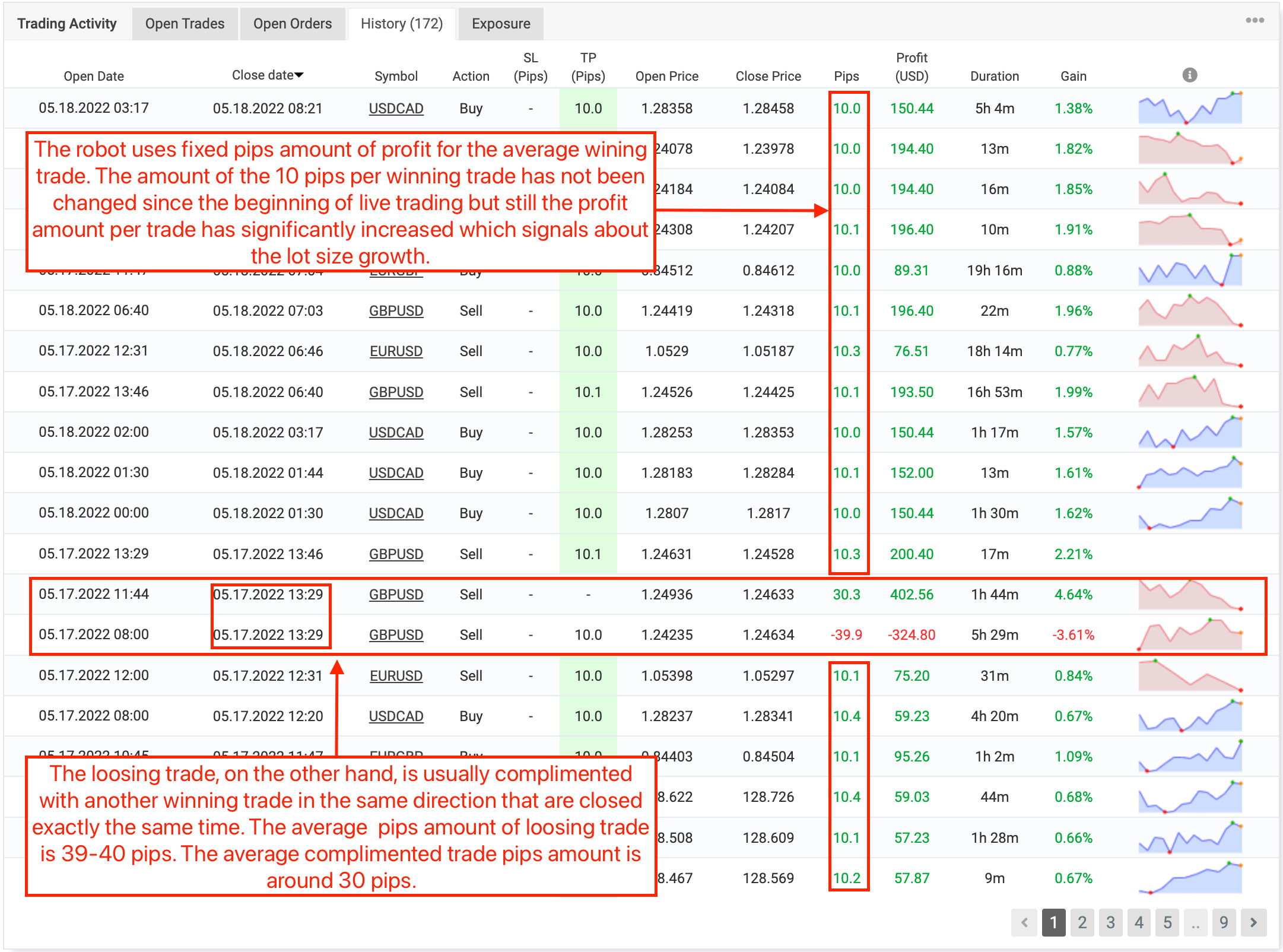 The losing trades, on the other hand, usually have a 39-40 pips stop-loss limit and every losing trade goes along with the complimented winning trade. The winning trades are opened in the same direction as the losing ones, so it excludes the possibility of the hedging usage, as it is declared by the developer. The pips amount of the average complimented winning trade is around 30 pips. Usually, the profit amount of those winning trades is higher than the amount of money lost. This also means that those complemented trades usually have a slightly higher lot size than the losing ones (look at the screenshot above).

The Money Tree Robot has a really high percentage ratio between won and lost trades - 93/7%. It is an incredibly high number for any Forex robot. Also, as we can see from the screenshot below, the system trades pretty often. The Money Tree EA has done 171 trades during its 4 months trading history. It means that the system on average makes 42 trades per month or 1.4 trades per day, which is what the developer claims about the robot - The Money Tree Robot trades every day.

As it is clearly seen from the following screenshot, The Money Tree EA usually closes trades in a range from 10 minutes to 5 hours. Still, some orders are closed during a short period such as 2-3 minutes, but it does not look like a systematic thing. Also, the system closes most of the trades during the period up to 1 day.

The Money Tree Robot is a newly released Forex EA that shows an incredible profit to drawdown ratio and tends to trade in a way to bring high profit with low risks. The system manages to keep the account growing fast with high monthly profitability and also has almost no fixed deep drawdowns during its 4 months trading history. There is also some hidden information about this robot that might have changed the way I look at The Money Tree EA, but now I can say that the system deserves your attention.

So let’s finish this review by giving appropriate assessments to the The Money Tree based on the analysis of its work, statistics, and other factors
Price VS Quality
4/5
Profitability / Drawdown
5/5
Statistics duration
3.5/5
Backtests
0/5
Authors’ rating
4/5
AVERAGE
3.5/5

Speaking about the price to the quality comparison of The money Tree Robot, I give it 4 out of 5. The price is respective to the results of the system, but there are some details about the robot that might have been done better, which does not give me a chance to rate it higher.

The profitability to drawdown level of The Money Tree Robot is good enough to give it 5 of 5. The system shows very high results of 5:1 in the profit to drawdown ratio.

The current trading period of The Money Tree EA reaches only 4 months, which is still not enough to give it max mark. That is why I give it only 3.5 out of 5 for this stat.

The developer did not provide any backtesting information for The money Tree Robot, which does not give me a chance to mark it higher than 0 out of 5.

I give this Forex robot 4 out of 5 stars. My attitude towards The Money Tree Robot is quite positive. The trading results of the system so far are quite impressive but still, it needs to work live for a longer period to show not only its profitability but also its strength and durability.

At the moment of writing this review, the automated rating system of the ForexStore rated The Money Tree Robot with 6 points out of 10 which is quite close to the marks that I gave in this Forex robot review.
I hope this helps you, traders! I wish you profitable trading and luck on the market!