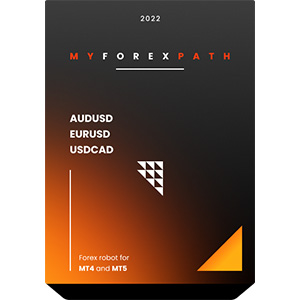 Forex expert advisor MyForexPath is designed in such a way as to determine a trend and open orders in its direction.

MyForexPath has been tested on all the currency pairs (AUDUSD, EURUSD, USDCAD) using 4 sessions for each. All the backtests are made since 2015, which shows 8 years of good and stable results.

Forex expert advisor MyForexPath is designed in such a way as to determine a trend and open orders in its direction. To do that the EA uses special algorithms and indicators such as MA and Parabolic. Also, in case of an unsuccessful entry and a change in trend, the robot will close previously opened trades in order to fix a small loss, avoiding large losses on a change in a direction of the trend. This provides the necessary protection against large drawdowns. In such a situation, the EA will take actions to compensate for the forced losses as soon as possible.

The EA works on three currency pairs: AUDUSD, EURUSD and USDCAD. Also, it is compatible with the most popular Forex trading platforms: MetaTrader 4 and MetaTrader 5. On average, MyForexPath has a win rate of 65-70% per trade, which is a good result.

The robot has 4 independent sessions for each pair, which provides a sufficiently large number of signals without a loss in their quality.

MyForexPath is compatible with any broker, so you don't have to worry about whether it will work as good on your trading account as it does on ours. The results will be identical!

Our EA has a drawdown control system, which will protect your account from unplanned losses. That is ensured with the help of a smart calculation of Stop Loss, as well as additional protection provided by closing orders at the Market prices.

In this review, we will look closely at the newest development in the field of Forex robots - MyForexPath. MyForexPath EA is a new word in Forex robo trading that shows incredible profit results during a long live trading history and is equipped with the best automated trading features and practices. Read on to get more about the robot!

The MyForexPath robot is supported with live trading statistics from the third-party company Myfxbook. The system has been trading on the AUDUSD currency pair with real money since November 2019 or for 30 months already. The robot has grown its live account for 1070% of profit starting the trading 30 months ago with the initial deposit of 2000. The trading curve of the MyForexPath robot is looking a bit sharp having some ups and downs but still the upward movement trend is strong and constant.

The first backtest shows the trading possibilities of the MyForexPath robot using 100% risk settings, and the other one shows backtest results using only 35% risk settings. Both backtests are made on a 1H timeframe using every tick backtesting model, which is the most precise method based on all available least timeframes. The backtests’ modeling quality is 90%, which is fine for the MyForexPath EA because it does not use a scalping strategy. Both backtests were made using 6 years of historical quotes (from 2015 to 2022) which is more than enough for the proper assessment.

The MyForexPath robot has been set to trade live since November 2019 with an initial deposit of $2000. This gives us trading statistics for 30 months to analyze and see the real picture of the robots' profitability. The EA has been able to trade profitably and gain more than 1000% of profit during its live performance period (1070% so far). This is a pretty good result considering that the maximum fixed drawdown level of the system is 37.61% and the monthly compound rate of return leading to the total gain is 8.65%.

Considering the statistics that are represented on the official Myfxbook page of the MyForexPath EA, we can see the real performance of the robot. Calculating the profit to drawdown ratio, we see that according to all the numbers it must be something about 0.3:1. This is not the highest ratio I've seen, nor it is the worst one. As we can see, the system does a good job gaining profit, even though some fixed drawdowns are seen on the graph above. MyForexPath has been able to recover from those and keep the upward moving curve trend.

MyForexPath EA is a fully automated robot that is compatible with MetaTrader 4 and MetaTrader 5 trading terminals. The system can trade using three currency pairs: AUDUSD, EURUSD, and USDCAD. It is also can work with any broker, as the developer declares.

The only real trading account of the robot has been trading using only one currency pair among three available: AUDUSD. Live results of the MyForexPath EA are concentrated on showing possible trading results using only one currency pair. It is also worth saying that the live account of the system uses a broker with 1:500 leverage, which gives it additional space to gain profit aggressively. Still, the aggressiveness of the system can be modified in the settings section of the robot.

The trading logic of the MyForexPath robot is shortly explained by the developer on the official website. The developer says that the MyForexPath EA is developed and programmed to identify the upcoming trend to trade in the direction of the trend. It is possible due to the algorithms and indicators such as Moving Averages and Parabolic used in the development of the EA. In case of unexpected changes in the trend or unsuccessful entry to the market the MyForexPath EA is set to close previously opened unsuccessful trades and fix a small drawdown so that larger loss can be avoided. It is the necessary protection against large drawdowns. If that kind of situation occurs, the MyForexPath EA is set to act to compensate for the losses asap. The drawdown control of the MyForexPath robot is also provided by the smart Stop Loss calculator that is also preprogrammed into the system.

As it is also explained by the developer, the EA has four independent trading sessions for each currency pair available for the system, which provides a sufficiently large number of signals without a loss in their quality. This is one of the best features of this Forex robot that makes it profitable and unique.

As it is seen from the live trading graphs, the MyForexPath EA uses a fixed lot size of 0.30 for average trade, and in the case of previous losing trades, it can raise it to 1.20 lots to compensate for losses (look at the screenshot below). 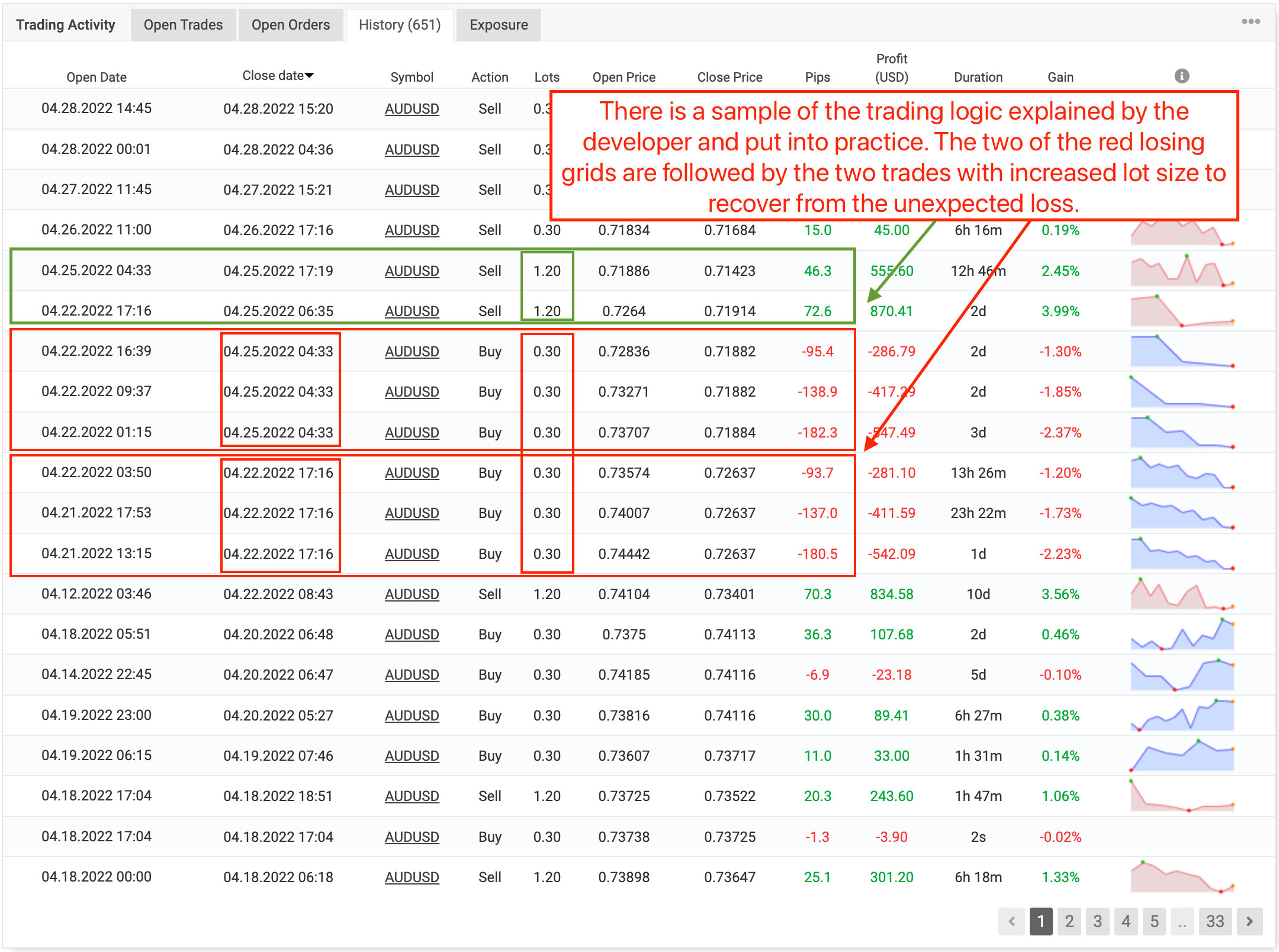 The system also uses some kind of grid, as we can see from the closing time of the trades. Those two grids marked with red might be two separated trading sessions of the system that both were closed in loss and then the loss had been recovered by two trades with increased lot size (marked with green).

Talking about the lot size and profitability of the system, it is important to mention that the robot obviously uses the compound interest to maximize profits and cumulative gain on the account. This is clearly seen if we compare the statistics of the robot at the beginning of the trading and the present once. The robot

The MyForexPath EA has made 650 trades since the beginning of the live trading. 65% of them were winning once and only 35% were losing trades. This means that the MyForexPath robot makes almost three times more profitable than the losing one, which is a wonderful result that ensures the statements made by the developer. It also gives us some information on how frequently the system opens and closes orders. On average, the robot makes 21,6 trades per month or 0.7 trades per day.

The average trade duration of MyForexPath EA is a bit wide-ranged. Most of the trades are usually closed by the system in the range from 1 hour to 7 days. Some trades can be opened for up to 20 days, but these are only isolated cases. As a rule, the trades of MyForexPath EA most likely can be winning if they are opened up to 7 days. As the following screenshot shows, most of the trades that were open for a longer time ended up being lost once.

The MyForexPath EA as we see from the review is a strong and enduring Forex robot that shows durability during 30 months live trading period and has got high-performance results. It is a Forex robot that brings profit due to interesting technical decisions implemented into its trading strategy. The robot is profitable and still shows enough durability to keep the performance results up.

The system combines great tools and their successful work, which is proven by the Myfxbook live trading results with real money. The backtesting of the system is as good as the real performance. There are guarantees of the quality of the product, and a refund policy in case the systems would not fit the customer. For me, all these factors are powerful arguments for the quality of the MyForexPath EA.

So let’s finish this review by giving appropriate assessments to the MyForexPath based on the analysis of its work, statistics, and other factors
Price VS Quality
5/5
Profitability / Drawdown
4/5
Statistics duration
5/5
Backtests
5/5
Authors’ rating
4/5
AVERAGE
4.5/5

Having to explain the final marks of this review, I start from the price and quality ratio mark, where the MyForexPath EA has got 5 out of 5. In my opinion, the price is quite suitable for this EA considering that the system has all the backtests, good live statistics, and has a history of 30 months of successful work on the real account.

As mentioned in the review, the drawdown/profitability level of this EA is actually not too high, but still good. It reaches a 0.3:1 ratio, which is high for most of the systems out there. That’s why MyForexPath EA got 4 out of 5 for this.

MyForexPath EA has got a live trading statistic since November 2019 which is enough to say that the EA is durable for the market changes, and it trades stably. My mark for the reliability and durability of the system is 5 out of 5.

The backtest of MyForexPath EA uses the quotes' data from 2015 until 2022, giving us 7 years of backtesting on all the available for this robot currency pairs. These results are enough to give this EA 5 out of 5 for this mark.

And my thoughts about this Forex robot are mostly positive, and it is quite similar to the objective marks that have already been given. I give MyForexPath EA 4 out of 5.

At the moment of writing this review, the automated rating system of the ForexStore rated MyForexPath EA 10 points out of 10 which is a little higher in equivalent to the marks that I’ve considered after review of this Forex robot but still very close.
I hope this helps you, traders! I wish you profitable trading and luck on the market!