FXParabol is a 100% automated Forex robot.

By purchasing our robot, you will receive two versions of the program that works on MetaTrader 4 and MetaTrader 5 platforms. Also, you will be able to manage your license online in a Personal Area.

Our development of FXParabol is based on a combination of the Parabolic SAR and Bollinger Bands indicators. The robot uses a combination of these indicators in such a way as to detect a trend and determine the moment when to start trading in the direction of this trend. There is also a special mathematical algorithm in the EA that allows it to compensate even for losing trades.

FXParabol robot works on three currency pairs: USDJPY, USDCHF and EURUSD. It has a special system that limits possible drawdowns, which you can easily configure in the settings.

Works on MT4 and MT5 platforms

By purchasing our robot, you will receive two versions of the program that works on MetaTrader 4 and MetaTrader 5 platforms. Also, you will be able to manage your license online in a Personal Area.

You will also get:

FXParabol EA is the newest 100% automated Forex robot that's is designed to bring profit by accurately mathematically calculated trading thanks to trend indicators and specific math algorithms. Read the close-up review of the FXParabol EA to see the advantages and disadvantages of the system.

The FXParabol EA has got two real live trading accounts on Myfxbook service where it trades on different currency pairs - USDJPY and USDCHF. Both accounts have been trading live since August 19, 2020, which allows us to analyze approximately 1.5 years of live trading. Starting with the initial deposit of $1000 and $1500 the FXParabol EA has reached profits of 427% and 372% respectively. Looking at the smoothness of the graphs, we have to admit that this Forex robot has been able to keep its trading graphs clean from deep fixed drawdowns and significant losses. Graphs look strongly moving up and show no signs of sharp-edged movement.

The FXParabol EA has managed to grow the USDJPY account’s profit by 427% since the beginning of live trading. It is a pretty high result if considering that the maximum floating drawdown level the system has ever reached was only 22.8% and the average monthly compound rate of return is almost 10%.

The live trading numbers of the FXParabol robot that were previously described show us possible future outcomes of using this EA. Having 428% of cumulative gain reached in 18 months with the maximum fixed drawdown of 23%, the average profit to drawdown ratio is 0.43:1. These numbers might not be looking pretty impressive but still, it is good results to get profits with not that high risks.

The other trading account of FXParabol EA shows a bit different trading results. On the USDCHF account, the system uses an initial deposit of $1500 and has been able to reach 373% of gain during the 18 month live trading period. The monthly compound rate of return for this robot is quite close to the other accounts' - 9.1%, but the floating drawdown level is much higher. The maximum floating drawdown level for the USDCHF account is 59%, which is a pretty high number.

Considering the described numbers of this FXParabol account, we can calculate the approximate profitability to drawdown ratio. With 372% of cumulative gain that the system collected through the 18 months live trading period, and with a maximum fixed drawdown level of 59%, the average ratio should be around 0.15:1. This result is quite low for the Forex robot that wants to be called highly profitable.

The main idea of the FXParabol EA is explained by the developer pretty clearly. The robot is designed as a fully automated system that bases its work exclusively on mathematical calculations and indicators analysis. The main instruments that are used by FXParabol EA are two trend indicators that work in pairs - the Parabolic SAR indicator and the Bollinger Bands indicator.

Moving to analyze the live performance of the FXParabol EA, we will concentrate on one live account to properly discover and understand the trading system that lies behind the name of the robot. I chose to analyze the "FXParabol USDJPY" account that operates starting from the initial deposit of $1000 and gained 427% of the profit.

We can clearly see from the graph that the system uses some kind of lot size growth due to the previous losing trades. But it must also be emphasized that the growth of lot size is pretty conservative. The system has this lot-size multiplication pattern: starting generally with the lot size of 0.10 the system grows next trades to 0.15, 0.22, 0.34, 0.50 of the lot. This means every lot size multiplication step is approximately multiplied by 1.5 times. You can see it from the graph below. 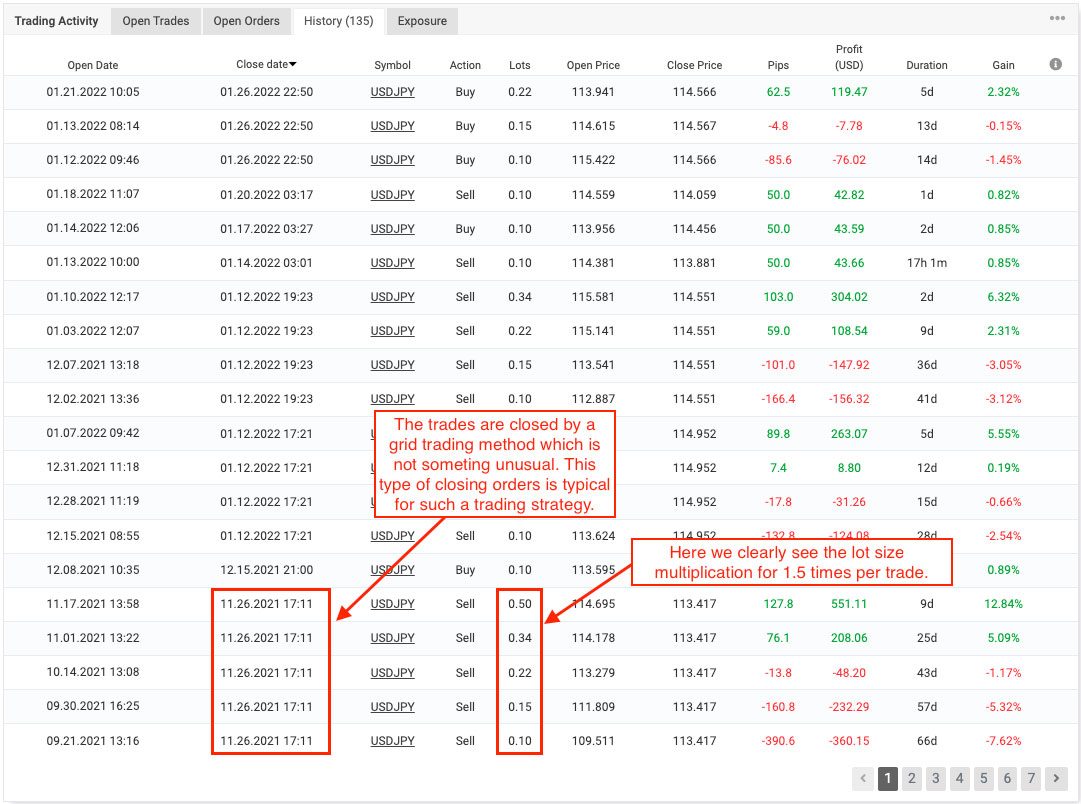 It is also clear that the system uses a grid-looking way of placing and closing trades (we can see it from the screenshot above). This is not something extraordinary, as it is quite a typical approach to trading when using the lot multiplication method of recovery from losses. However, the system manages to be productive and stable in profit and reliability using such a strategy. This means that the calculations and work of the indicators complement each other and bring good results.

Moving ahead, it is important to see the density of trades during the trading period of the robot. The FXParabol EA has made 134 trades during the 18 months trading history on the real account. This makes it doing approximately 7.3 trades per month which is not too many. But this is fine due to the chosen trading strategy that includes gridding and lot multiplication, which also requires waiting and analyzing the market movement.

The duration of trades being opened for FXParabol EA is in the range of 1 hour to 15 days. This means that the system can and would be keeping trades open to reach the desired gain level. FXParabol EA is not the system that would be closing deals a few times every day. Also, it is seen from the screenshot below that usually the trades that are kept open by this Forex robot longer than 15 days become losing once. The most profitable trading periods range for FXParabol is from 1 hour to 5 days. There are no losing trades closed in this period during the trading history of the system.

The FXParabol EA, as we saw in the review, is a pretty solid robot that can bring profits due to the great combination of technical indicators that work for it and the mathematical calculations performed by the system. The robot can be profitable and reliable at the same time, which is key to success in the modern Forex market trading process.

The system is equipped with the best tools and the successful work of it proved by the Myfxbook live trading results with real money. The backtesting of the system is as good as the real performance. There are guarantees of the quality of the product and a refund policy in case the systems would not fit the customer. For me, all these factors are powerful arguments for the quality of the FXParabol EA.

So let’s finish this review by giving appropriate assessments to the FXParabol based on the analysis of its work, statistics, and other factors
Price VS Quality
5/5
Profitability / Drawdown
4.5/5
Statistics duration
5/5
Backtests
5/5
Authors’ rating
5/5
AVERAGE
5/5

The price of FXParabol EA is appropriate to the quality, which is proved by 1.5 years of the trading statistics that show a high profit to drawdown ratio and haven't had long fixed drawdowns or small drawdowns that haven't been recovered. The system has several backtests and a money-back guarantee, which together with a not that high price of $289 makes me give it 5 out of 5 for this stat.

Statistics duration of this FXParabol robot as mentioned is 18 months which is more than enough to say that the system is reliable and profitable for long-term trading. With that being said, I give it a maximum of 5 out of 5 stars.

FXParabol EA has got backtests made on 5 and 6 years long history quotes for different accounts, which is fine for such a system to confirm the reliability and productivity. So, here it gets 5 out of 5.

I feel good about the FXParabol EA. The system is profitable and has got a unique character. I am absolutely confident that this Forex robot will show itself highly profitable and reliable in the future. And for me, the FXParabol EA has already shown the perspective of its work pretty clearly. So, I give it 5 out of 5.

At the moment of writing this review, the automated rating system of the ForexStore rated FXParabol EA 10 points out of 10 which is very close to the marks that have been given in this review. This Forex trading system for sure deserves your attention.
I hope this review helps you, traders! I wish you profitable trading and luck on the market!