FULL SOFTWARE ACCESS
You will get full access to the Trader Explorer software accompanied by clear, detailed guides about how to set it up.

AUTOMATIC, BUILT IN SETTINGS
Never will you have to second-guess yourself, wondering if the software is running on its optimal settings. That’s already taken care of for you. All you have to do is literally load the settings provided (set it and forget it).

FREE UPDATES FOR LIFE
Market conditions change and some strategies that once worked become obsolete, but, with Trade Explorer, you won’t have to worry about that. Updates are on the house to maintain the edge it was originally developed with.

24/7 MONITORING SERVICE
Instead of racking your head trying to determine which currency pairs were ripe for trading, that’s automatically detected and executed for you by the software. Remember, it scans over 27 pairs, hunting for opportunities to be exploited.

SUPERB CUSTOMER SERVICE
Be assured that in the case that you have any issue during your use of the software – our team is available to help you. Additional stress is not what you’d have bought Trade Explorer for and we’ll do our utmost to make sure you’re overly thrilled with the service.

BEST RECOMMENDATIONS
You are always welcome to use any services you prefer, but we do provide the best recommendations possible to maximize success with Trade Explorer.

100% 30-Day Money-Back Guarantee. If for ANY reason at all you feel Trade Explorer is not for you, just send us an email within the first 30 days after purchase for a complete no questions asked refund.

Trade Explorer EA is one of the newest Forex robots produced and represented by the LeapFX company which shows high results so far. In this review, we’re going to break down the live trading performance of this EA. Read the following review to get more information about Trade Explorer EA.

The Trade Explorer EA has got a long number of 6 real and 2 demos Myfxbook verified accounts represented on the developers’ website. The EA is programmed to trade on a surprisingly wide range of currency pairs which includes 27 pairs. Trade Explorer EA on all the real live accounts trades on more than 20 currency pairs. The statistics for this Forex robot are actually pretty new, having a max of 5 months of trading, and most of the accounts have only 2-3 months of real live trading. Considering such a short trading statistic the EA was still able to reach a gain level of over 210%.

There are two purchasing options available for Trade Explorer EA: the $397 version which includes one-year access to all the features of the robot and the $679 version that gives a full lifetime membership. Both options include the full package of features of Trade Explorer EA such as

The developer claims that this Forex robot can properly work on up to 27 currency pairs which are confirmed by the fact that all the real live trading accounts of the Trade Explorer EA work on 20 and more currency pairs simultaneously. This EA trades on the M5 timeframe, and it is compatible only with the MetaTrader4 trading platform. There is no recommendation given by the developer on the minimal leverage size for this Forex robot.

Analyzing the live performance of this Forex robot primarily it is needed to say that the EA has been out working on the real accounts only for 5-7 months. And the most successful trading account of the Trade Explorer EA developers (“Trade Explorer Doubler”) has been live only for three months. The EA has reached 210.55% of gain in just three months which means that the robot trades with very high risks and a large margin. This is confirmed by the following screenshot of the account’s statistics on Myfxbook where we can see that the EA trades with the “EXNESS” broker with the incredibly high leverage level of 1:2000.

As we can see the “Trade Explorer Live” have faced a huge stoploss on February 10 saving only 6.82% of the gain.

And the “Trade Explorer Runner” account faced even more serious damage and went into negative having -15.35% of the gain. These accounts have been working live for 3 and 4 months respectively.

One of the negative factors of this EA is that there is no practical information about the trading strategy of the robot. The developer does not give any clue about the trading algorithms built in the trading system. Most of the information on the selling webpage is just material that aggressively pushes the customer to purchase this robot. There is no technical information about what the person pays for. All the statements, texts, and videos urge a customer that Trade Explorer EA is a cash machine and there is no risk at all. 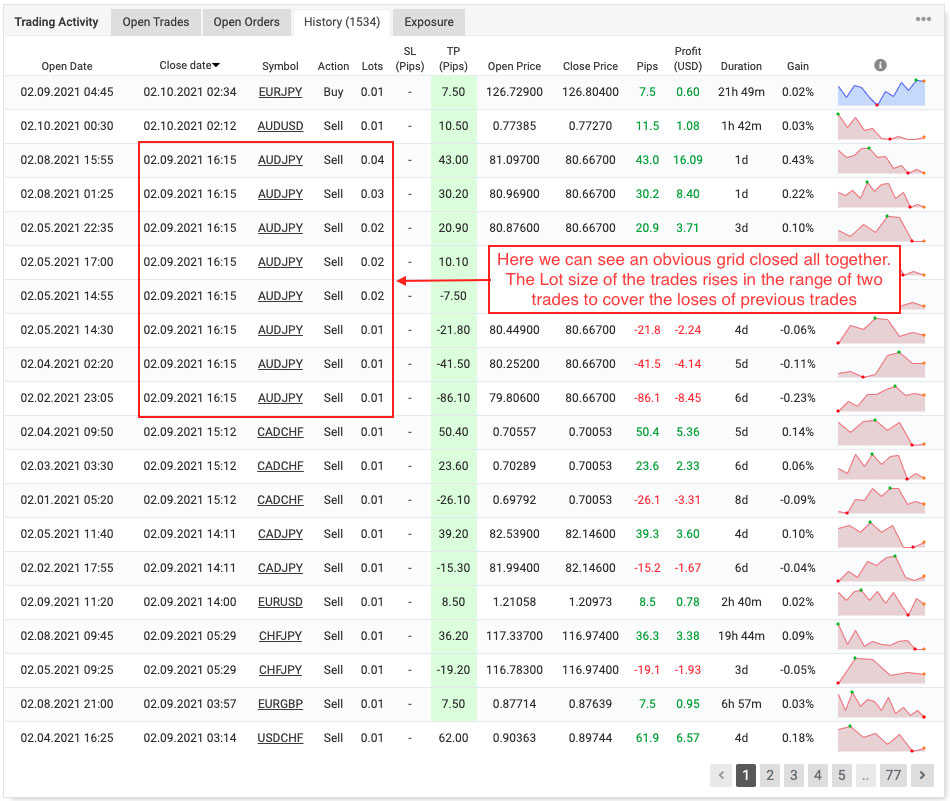 This is a trading activity graph of the “Blaze Markets Trade Explorer” account of the robot. This graph might be indicative to open up a trading strategy of the Trade Explorer EA.

The Trade Explorer EA is a newly released Forex robot that shows really high profit to drawdown ratios and trades aggressively bringing a high profit. But the aggressive way of trading, the incredibly high risks with the huge leverages, and the Martingale grid-looking trading style speak up about a danger when trading this EA.

I hope, my assumption will be wrong, but I think it is just a matter of time for the live trading accounts of Trade Explorer EA to blow up because even for now we already see two live accounts of the robot being partially or fully destroyed.

So let’s finish this review by giving appropriate assessments to the Trade Explorer based on the analysis of its work, statistics, and other factors
Price VS Quality
2/5
Profitability / Drawdown
5/5
Statistics duration
3.5/5
Backtests
0/5
Authors’ rating
2/5
AVERAGE
2.5/5

Speaking about the price to the quality comparison of Trade Explorer EA I give it 2 out of 5. The price of $679 for the trading system that’s been live for only a max of 5-7 months and has 2 blown accounts in my opinion is inappropriate.

The profitability to drawdown level of the EA is quite impressive (if not taking into account the blown-up accounts) having an average of 1:1 ratio. This definitely gives me a reason to give it 5 out of 5.

I give this Forex robot 2 out of 5 stars. This Forex robot can bring high profits in a short period but all the factors are given in the review testify about the very dangerous nature of this EA which is not what could be called a reliable Forex robot.

At the moment of writing this review, the automated rating system of the ForexStore rated Trade Explorer EA with 7 points out of 10 which differs a lot from the marks that I gave in this Forex robot review.