High Returns Being Yanked From Up To 18 Currency Pairs Including GOLD Without Using Grid, Martingale OR Hedging Strategies!

Information about The Fund Trader

No Grid and No Martingale

If after 30 days, you're not at all happy with the returns you wouldn't have otherwise made yourself, simply send an email and you will be honored refund.

Here is a review of the Fund Trader EA – the Forex robot produced by LeapFX that shows incredibly high profitability trading 18 currency pairs. Let’s break down the trading performance of the system in this review.

Basic information about The Fund Trader:

Live performance of The Fund Trader

The Fund Trader EA has been trading for 59 months already collecting more than 91k% of profit since the trading period started. But, in fact, the trading results graph looks a bit suspicious starting from March 2021. As we can clearly see, The Fund Trader EA multiplied the results it had gained during the last 5 years by 6 times in just 2 months which feels almost impossible to do considering the past profitability of the robot.

The smooth trading curve that's been calmly growing with constant success for 5 years abruptly started to increase with an unrealistic looking tempo. On the following screenshot, I marked the main characteristics of the account as well as the point where the growth began.

The profit of The Fund Trader EA is an incredible number of 91626%. The monthly profit of the robot is 12.46% and the maximum drawdown level of the system is 46.81%. The system has been trading live for 56 months already, and so we can define the profit to drawdown ratio of this EA. Considering all the numbers that have been mentioned the profit/drawdown ratio of The Fund Trader EA is 0.3:1 which is the normal result for Forex robots.

Considering not that big profit do drawdown ratio and the gain level that we can see on the official account it is obvious that the system most likely uses the compound interest to grow the account. It is easy to trace this by looking at the numbers of trading statistics, where we see the constant growth of the lot size during the time. Furthermore, even though the system does not use Martingale as it is declared on the official developers' website, some grid is still used in the trading logic. We can see it from the following screenshot, where the obvious grid-looking closing of the trades is seen. 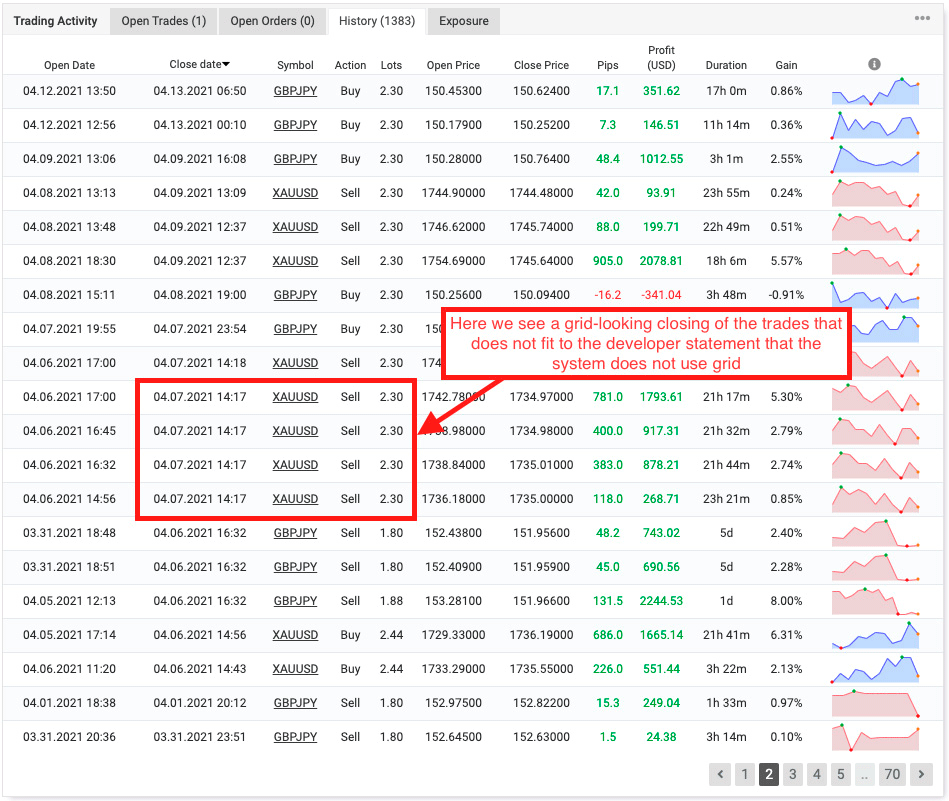 However, the results do not describe this system as a “new holy grail” of automated Forex trading. As I mentioned, the results of this Forex EA look almost unrealistic which makes me suspicious of the presented performance of The Fund Trader EA. There is a big question why the developer has not shown the results of the system for five years and opened it only two months ago? The following screenshot shows that the system was released to the Myfxbook only on March 9, 2021, but it has trading statistics for more than 56 months.

The Fund Trader EA developer declares that the system uses 18 currency pairs, which are also seen from the following screenshot. But the most of the profit on the account was made on the XAUUSD currency pair. Almost half of the gain was made on the single currency pair with only 89 trades during the whole five years trading period. 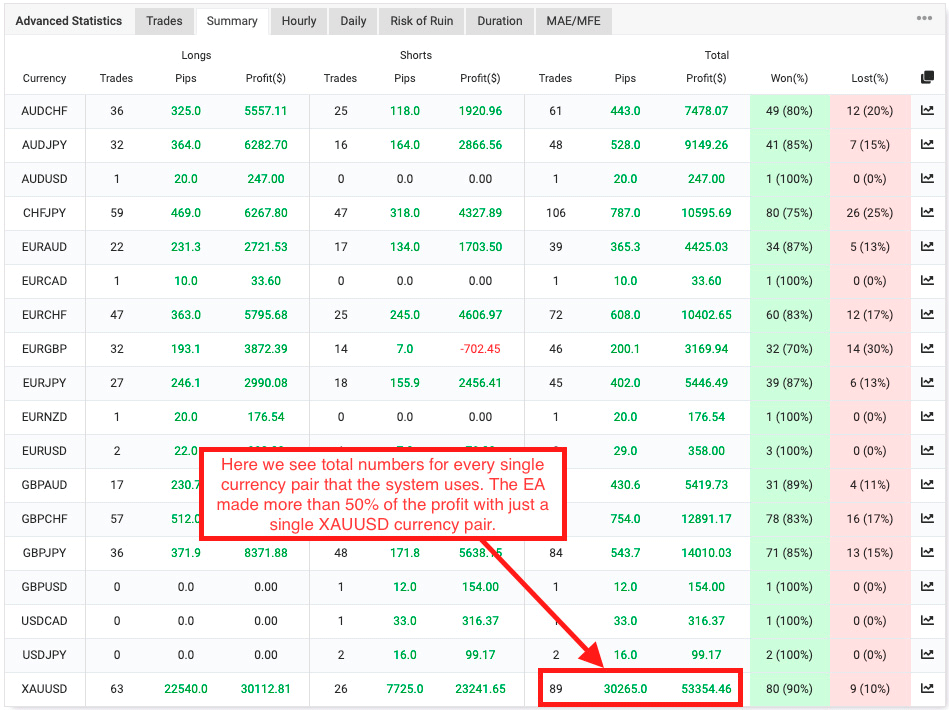 In fact, there is even more about it. The trading statistics of The Fund Trader EA show that the system hasn't been using the XAUUSD currency pair until the beginning of the "big burst" that started in March 2021.

The system has managed to make 729 trades during 56 months of the live trading statistics which makes it to do approximately 13 trades per month. It is not that many yet, the system uses a quite aggressive approach to the lot management and compound interest dynamic.

Trade’s duration of The Fund Trader EA is in the range of the minimum of 3 minutes and the maximum of 12 days. This is quite an ordinary duration for trades which surely excludes the possibility of scalping on the account.

The Fund Trader EA causes very mixed feelings in me because of its unrealistically looking but still verified by Myfxbook live trading results with the incredible gain level and the rapid deposit growth during the last few months. I would advise those who are interested in purchasing this Forex robot to wait and see it trading for a longer period (at least a couple of weeks more). Another option could also be to start trading on a demo account and check the system for at least a month.

Even though the system shows amazing results, I am still skeptical about this Forex EA because of the pitfalls I discovered during this review. The small inconsistencies in the numbers and developers' claims along with the unrealistically looking trading curve make me recommend you not to rush with conclusions and see how the system will show itself during the next couple of months.

So let’s finish this review by giving appropriate assessments to the The Fund Trader based on the analysis of its work, statistics, and other factors
Price VS Quality
3.5/5
Profitability / Drawdown
5/5
Statistics duration
5/5
Backtests
0/5
Authors’ rating
4/5
AVERAGE
3.5/5

Speaking about the price to the quality comparison of The Fund Trader EA I give it 3.5 out of 5. The price of $597 for one year membership of the product that has so many controversial things to say about feels a bit exaggerated to me.

The profitability to drawdown level of the EA is very good having an average of 0.3:1 ratio (considering compound interest used in the lot management of the system). This definitely gives me a reason to give it 5 out of 5.

I give this Forex robot 4 out of 5 stars. This Forex robot can bring high profits quickly, but all the factors are given in the review testify about the very dangerous nature of this EA. I would not recommend using this EA right away but to start with a demo account or a small account using small lots.

At the moment of writing this review, the automated rating system of the ForexStore rates The Fund Trader EA with 7.5 points out of 10. This differs a bit from the marks that I gave in this Forex robot review. I consider that the ForexStore system gives higher marks because of the formal numbers which are very high but the look of it feels unrealistic.

I hope this helps you, traders! Furthermore, I wish you profitable trading and luck on the market!