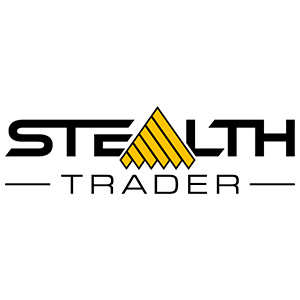 This is a 100% hands free trading system, that, once loaded, there is no further involvement from you, the end user.

It is a low drawdown system, meaning it's designed to trade with very little loss while maximizing profits using NO martingale and NO grid strategy whatsoever.

Here’s What You Get When You Become A Member

You will get full access to the Stealth Trader System that is coded with auto optimized settings, so it is profitable from the first day of trading. Make no adjustments—simply select your risk.

FULL SUPPORT FOR ANY ISSUES THAT MAY ARISE

Even though we don’t expect it, should any issues arise, they will be expertly dealt with by our customer service team. Help will always be at hand if you need any assistance.

Stealth Trader rarely needs updates, but any improvements we make to the software automatically is provided to you in members area absolutely free.

30 Day Money-Back Guarantee. If you’re not thrilled by its performance after 30 days, you’ll quickly get a cheerful refund. No questions asked!

Stealth Trader EA is one of the newest Forex robots produced and represented by the LeapFX company, which shows high results so far. In this review, we’re going to break down the live trading performance of this Forex robot. Read the following review to get additional information about Stealth Trader EA.

The developer of the Stealth Trader EA provided us with three live trading performance charts by the third-party company Myfxbook. The robot trades only on the GBPJPY currency pair and obviously, all three statistics are live trading on this currency pair. The longest live trading from all the charts has been done on the “Stealth Trader #1 Account - Long Term” account. The Stealth Trader has been trading live on the account since July 11, 2020, which is almost 22 months already. The other two accounts have been live since October 31, 2021, which is only 6 months' statistics.


Considering the duration of the live trading accounts statistics, the results look pretty good. The Stealth Trader reached an amount of 1299% of the profit on the “Long Term” account but also much less on two other newly created accounts - only 70% on the “#2 Account” and 184% on the “#3 Account”. The statistics graphs of the Stealth Trader EA look very sharp having many downward movements but still, the main trend is upward, and the profit also confirms this.

There are no backtests made by the MT4 Strategy Tester for the Stealth Trader. But on the official website of the robot, the developer provided some kind of backtests made with the help of the Myfxbook platform. These backtesting results of the system are not that impressive at all. The robot manages to make a little more than 100% of the profit using the data of 3 years of historical quotes. These results really add nothing to the quality of the system, even more, it shows that the Stealth Trader EA might be not that effective in the long-term trading.
All the backtests are made on a 5M timeframe using every tick testing model, which is the most precise method of backtesting based on all available least timeframes. The backtests' modeling quality is 90% which is okay for this EA because it does not use a scalping strategy.

Stealth Trader EA is another development of the LeapFx company which goes along with other robots that we’ve already reviewed before, such as The Fund Trader, Trade Explorer, DynaScalp, and Bounce Trader.

The Stealth Trader is made to trade the only GBPJPY currency pair and uses a 5M timeframe, and it is compatible only with the MT4 trading platform. There is no recommendation given by the developer on the minimal leverage size for this Forex robot but according to the official statistics of the Stealth Trader EA, we can see that the developer chose to use 1:100 leverage which might be the recommended one.

The longest that Stealth Trader has been working on the live account with real money is 22 months already. As the live trading on the “Stealth Trader #1 Account - Long Term” account began on July 11, 2020. The other two accounts have been trading live only since October 31, 2021, that is 6 months of live performance. The robot has been able to get an outstanding amount of the profit on the “Long Term” account - 1299%. Still, there are no signs of some dangerous practices and technics that might have been done to boost the numbers.

Another two of the Stealth Trader accounts, even though they were live only for 6 months, still show even better ratio results. The “#2 Account” reached the gain level of almost 70% having an average monthly profit level of 10%. At the same time, the highest fixed drawdown level on this account has reached the number of 16%. These numbers show us that the approximate profit to drawdown ratio on this Stealth Trader account is 0.63:1 (look at the screenshot below).

The thing that is needed to be cleared here is that the "#2 Account" actually does not work automatically. It is mentioned in the header of the chard screenshot above that the system is Technical but Manual, which means that the trading on the given account is managed manually by the real trader and does not go automatically. This could actually be a sign of some manipulations in the trading logic of the system not only on the given account but also on the customers' accounts as well, but it is almost impossible to reveal the truth of it.

The third live account of the Stealth Trader ES has also got 6 months of real trading but, in fact, outnumbered the second account having a cumulative gain level of 184% and an average monthly gain of 21%. Considering these numbers as well as the maximum fixed drawdown level of 30% (look at the screenshot below), we can surely count and approximate profit to the drawdown level, which in this case is 0.7:1. This result is the highest among all the trading accounts of the Stealth Trader EA.

While there are three live accounts, we'll be focusing on analyzing the one that has the most data to analyze as well as the longest trading statistics. And to begin with, it is needed to be said that there are some problems with the analysis of the Stealth Trader EA statistics. Foremost, it is because the developer of the robot hid a lot of crucial information for the wide trading analysis of the system, such as lot size of trades, the balance, profit, deposit, etc. And so, we will try to get as much information as possible from the data that's left open.

As we can see, even though the developer made a statement that the system does not use Martingale or grid strategy, there are still signs that some kind of grid is used in the trading of the Stealth Trader EA. On the screenshot below, I marked the trade sets that look like grids. And even though we cannot see the exact lot size of the trades, it is still obvious that not all the trades in those columns have the same lot size if we look at the pips and gain columns. The pips taken in those trades are the same for all three trades, but the gain is different. This might look like some kind of modified grid strategy (look at the screenshot below). 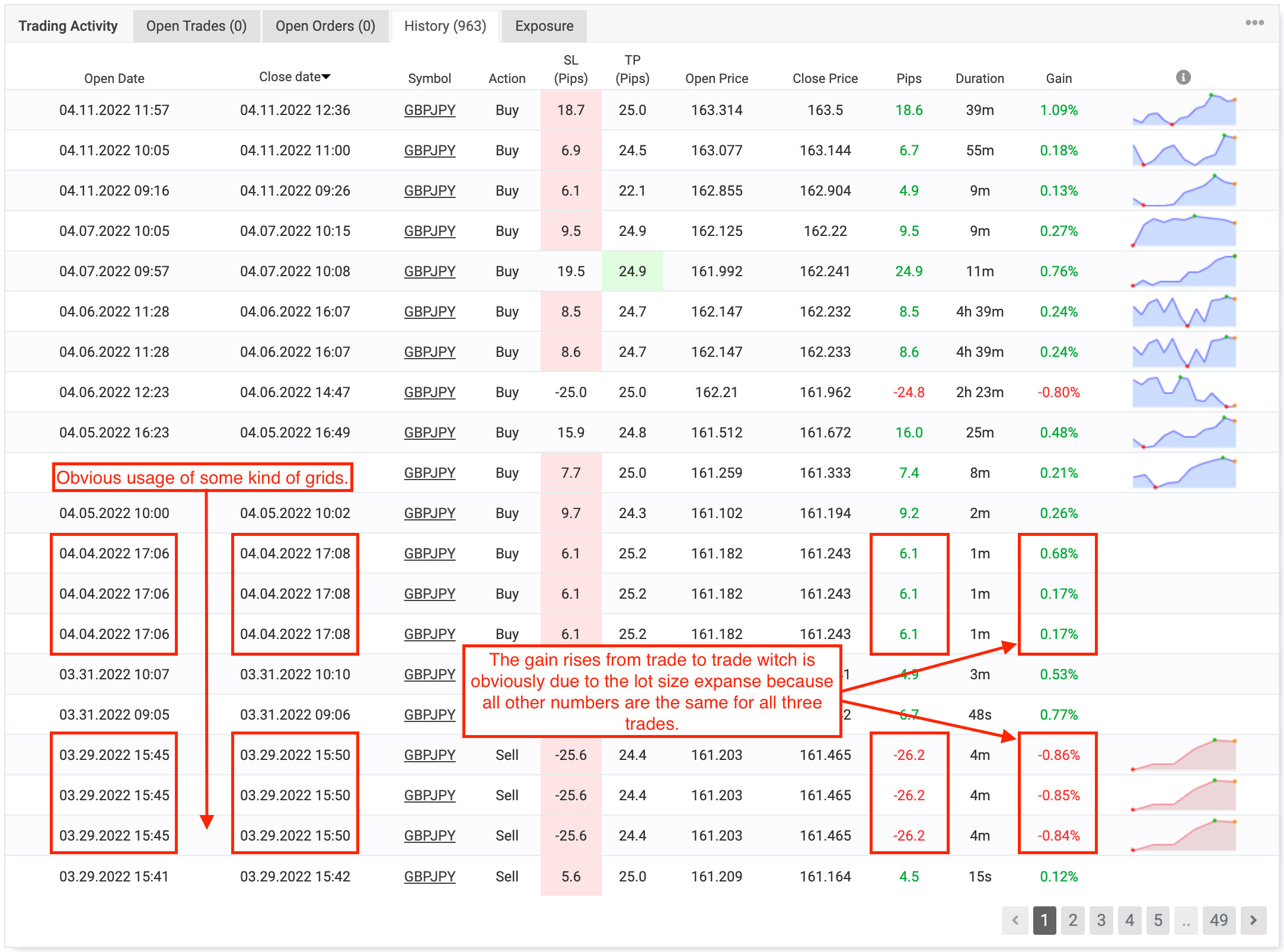 As it is clearly seen from the following screenshot, the Stealth Trader EA closes most of the trades in a range from 10-15 minutes to 1 hour. Still, some of the orders are closed during a pretty short period, but it does not look like a systematic thing. There is also an interesting fact that there are no losing trades that would have been less than -0.8% of the account equity, which also says a lot about the strategy of the robot.

The Stealth Trader EA is a newly released Forex robot that shows good profit to drawdown ratios and tends to trade in a way to bring high profit with low risks. The system manages to keep all the accounts growing, even though the graphs are not so smooth and strongly upward-looking. There is also some hidden information about this robot that might have changed the way I look at the Stealth Trader EA, but now I can say that the system deserves your attention.

So let’s finish this review by giving appropriate assessments to the Stealth Trader based on the analysis of its work, statistics, and other factors
Price VS Quality
4/5
Profitability / Drawdown
4/5
Statistics duration
5/5
Backtests
2/5
Authors’ rating
4/5
AVERAGE
4/5

Speaking about the price to the quality comparison of Stealth Trader EA, I give it 4 out of 5. The price is respective to the results of the system, but there are some details about the robot that might have been done better which does not give me a chance to rate it higher.

The profitability to drawdown level of the Stealth Trader EA is good enough to give it 4 of 5. The system shows high results of 0.45:1, 0.63:1, and 0.7:1 in the profit to drawdown ratio.
The current trading period of the Trade Explorer EA has a max of 22 months, but it is only one trading account that has such a long trading period. The other two accounts have only 6 months of live trading. Still, it is enough to give it 5 out of 5.

There are no original MT4 backtests made for this Forex robot, but the developer provided three backtests made by the Myfxbook backtester which is not the best decision but at least we have something, that is why I give it 2 out of 5 for this.

I give this Forex robot 4 out of 5 stars. My attitude towards the Stealth Trader EA is quite positive. I don't see this robot as the best system on the market, or as some kind of money-making machine, but it can do what it is made for - it can bring profits as we see it from its live accounts.

At the moment of writing this review, the automated rating system of the ForexStore rated Stealth Trader EA with 8 points out of 10 which is quite close to the marks that I gave in this Forex robot review.
I hope this helps you, traders! I wish you profitable trading and luck on the market!