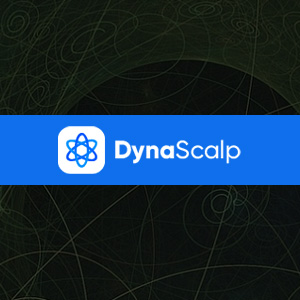 DynaScalp basically automates and organizes in weighted order the currency pairs that give the most profit in specific market conditions.

It uses NO GRID and NO MARTINGALE strategies.

It boasts strong news filters and closes all trades before weekends; these are protection measures to keep the account as safe as possible.

It comes pre-installed with best settings included… is completely plug and play… scalps with a high win ratio… implements stop loss on all trades along with a smart trailing stop system.

100% 30-Day Money Back Guarantee. Observe the performance of DynaScalp, and if within 30 days you're not at all happy, simply send an email and you will get a FULL, FAST refund with no questions whatsoever.

DynaScalp EA is another development of the LeapFX. This Forex robot is another example of the scalping EA that is produced by the company. In this review we will try to get more understanding across the perspectives and possibilities of DynaScalp EA, so let us begin!

There are two live trading statistics for DynaScalp from Myfxbook available on the developer’s website. Those accounts have been working live for 13 and 11 months already. The EA can trade on 15 currency pairs including XAUUSD. The trading charts of the SynaScalp EA look a bit sharp but with a strong upward trend which speaks up about the system's ability to earn profits.


All the backtests were made on 6 years of historical quotes from 2015 to 2021. Backtests were made on the basic MetaTrader backtester on the M15 timeframe with 99.90% accuracy because the EA uses a scalping strategy and needs the precise every tick data for its proper work. As we can see from the statistics the DynaScalp EA showed itself very stable and constant.

DynaScalp EA is another development of the LeapFx company which goes along with other robots that we’ve already reviewed before, such as The Fund Trader, Trade Explorer, and Bounce Trader.

So, by purchasing you will receive:

There are two live trading accounts of DynaScalp EA: the Medium-Risk and the Low-Risk accounts. In this review, we'll be focusing mostly on the Medium-Risk account because it has a long trading history and shows much higher results of both profitability and durability.

The DynaScalp EA has been already trading live for 13 months since July 2020 and has reached the max gain level of 599% on one of the accounts. As we can see, the trading curve looks smooth and has no obvious deep drawdowns which make the statistic look pretty solid and durable.

The maximum fixed drawdown that the system has reached is 17.31% and the monthly compound rate of return leading to the total gain is 15.91%. Considering 13 months of statistics we can conclude that the average profit to drawdown level of the DynaScalp EA is approximately 1:0.92 which is a fantastic result that speaks up about the nature of the robot.

There are no signs of compound interest usage on this account of the DynaScalp EA since the system uses quite the same range of lot sizes during the whole trading history. In fact, it looks like every currency pair that the system trades on is set to have its own lot size depending on the trading volatility of the currency pair.

The profitability of this Forex robot is focused not on the quality of trades but the quantity of them. Since DynaScalp EA is a scalping robot, it means that the system places a lot of orders frequently which ensures the growth of profits even in situations when some orders turn out to be unprofitable.

In fact, statistically, the DynaScalp EA has been doing approximately 237 trades per moths, which is almost 8 trades per day. The number of trades is distributed almost evenly over all the currency pairs except for AUDCAD, GBPAUD, GBPCAD, and USDJPY currency pairs, which have less than a hundred trades executed so far. 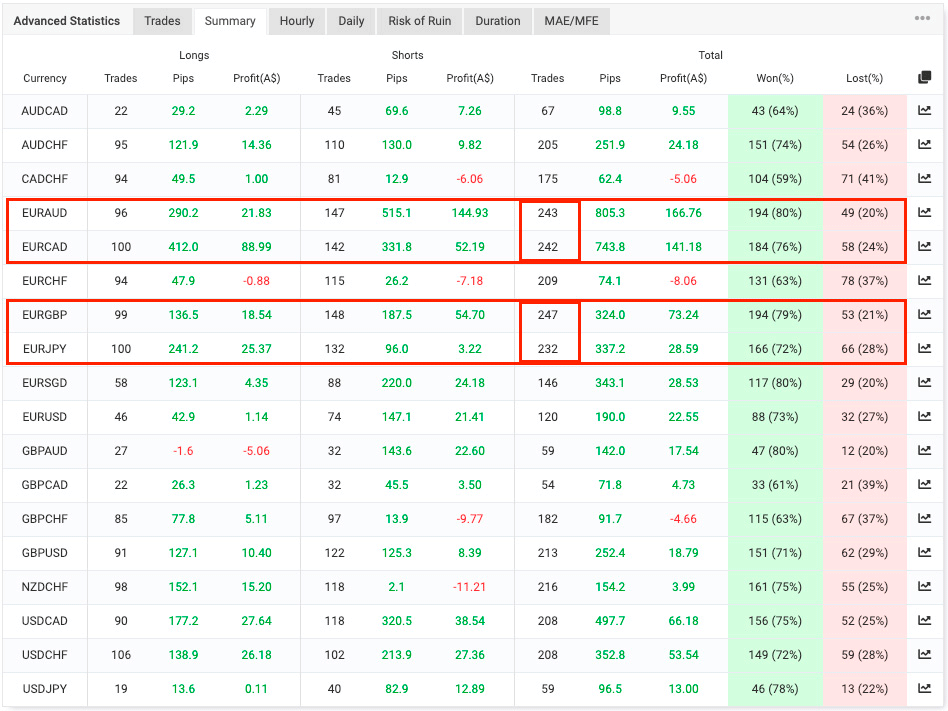 As we can see, the most tradable currency pairs among others are those whose main currency is EUR: EURAUD, EURCAD, EURGBP, and EURJPY.

The scalping strategy of the DynaScalp EA looks quite extreme to me because the system takes an average profit of 3 pips per trade which is too small for most good scalpers (look at the screenshot below). 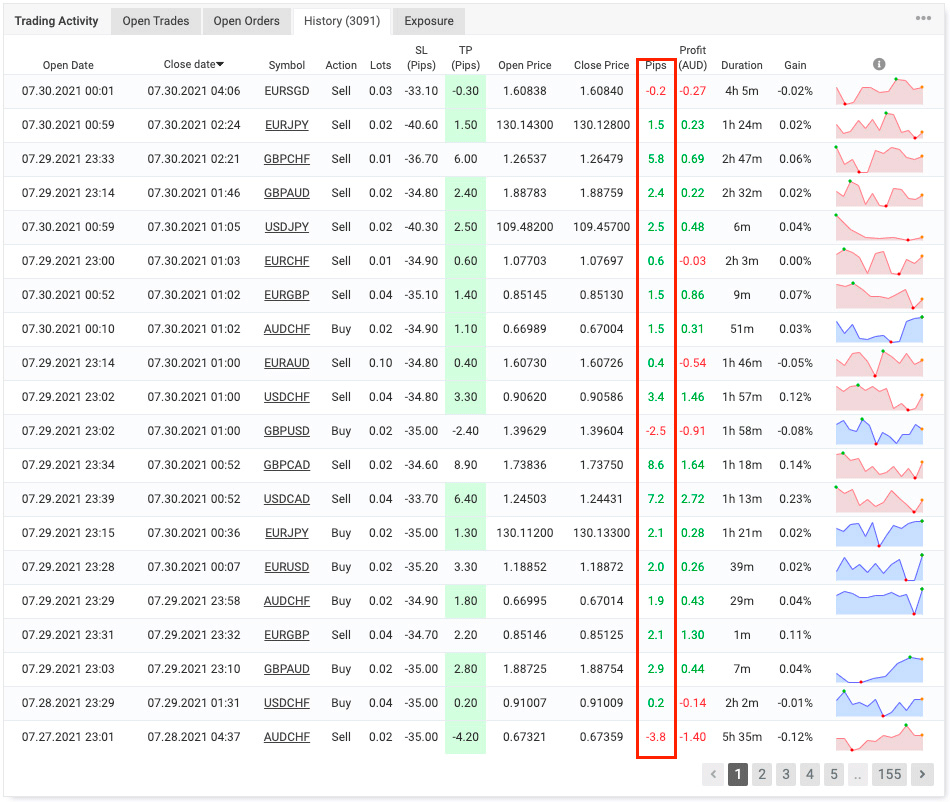 This darkens this pretty positive review of the system. It means that you might have problems using DynaScalp EA with certain brokers that have no narrow spreads. Also, this kind of scalping is sometimes perceived pretty negatively by some brokers, which can cause problems up to blocking the account.

Trades duration of the DynaScalp EA is quite obvious as for the scalper. Most of the trades are usually closed in the range of 20 seconds to 3 hours. Most of the trades that have been opened for a longer period than one and a half-hour in most of the cases end up being unprofitable.

The DynaScalp EA is a classic example of a pretty tough scalper produced by the LeapFx company. But still, the system shows itself durable and profitable as we considered in the review and has the potential to take its place among well-made robots on ForexStore.

I appreciate the effort and execution of the developers of DynaScalp EA and hope that this robot will show itself durable during the time.

So let’s finish this review by giving appropriate assessments to the DynaScalp based on the analysis of its work, statistics, and other factors
Price VS Quality
4/5
Profitability / Drawdown
5/5
Statistics duration
5/5
Backtests
5/5
Authors’ rating
3.5/5
AVERAGE
4.5/5

The DynaScalp EA has got 4 out of 5 stars for Price VS Quality. The system is well-made and shows high results in terms of profitability and durability and deserves to get a high mark for it. Still, some details are needed to be improved.

I give this robot 5 out of 5 stars for the profitability to drawdown ratio since the system has great numbers and shows high profitability along with an acceptable drawdown level.

The statistics duration of the DynaScalp EA is enough to give it 5 out of 5 stars, so here it goes. The same things can be said about the backtests of the system which gives another 5 out of 5 stars to the robots’ statistics.

I give this EA 3.5 out of 5 stars because of my personal attitude to scalping systems in general and to such a tough scalper as DynaScalp EA is in particular.

At the moment of writing this review, the automated rating system of the ForexStore rates DynaScalp EA with 8 points out of 10. This differs a bit from the marks that I gave in this Forex robot review. I consider that the ForexStore system gives it a lower mark due to the lack of a ForexStore license badge which ensures the security of the purchase.

I hope this helps you, traders! Furthermore, I wish you profitable trading and luck on the market!