FXHelix EA developers claim it to be a reliable and high profitable automated trading system that trades in such a way that most of the deals are closed in profit.
Let’s put it through a review and see what is the work of this EA in reality.

The EA has drawn a smooth and balanced upward curve through the time of its work as we can see from the EA’s Myfxboook account. Also, the backtests of the EA have shown the same perfect results.

So, looking at the charts of the official statistics of the EA we see that the system has shown a pretty high percentage of the drawdown which is equal to 52.14%. It is worth mentioning that this number is the exact highest percentage of the deepest drawdown that has happened on the account on May 17, 2019.

On the graph, we can see a few deep drawdowns that have been recovered without closing. The deepest drawdown has happened on May 17, 2019, and has recovered by Jun 07, 2019. A few smaller drawdowns have happened during October, December 2019, and one in February 2020 but as it happened before the EA has managed to recover and did not lose the deposit.

It could look like an oddly dangerous system if we only take into account the risks but before doing any conclusions let’s see also what is the ratio of profitability of the system.

The gain percentage of FXHelix EA is 742% and it has been on the market since July 2018 which is 22 months already. In this case, the average profitability percentage by month is 33,7 % which is also looking pretty high. So, as we can see the EA can bring an average of 33.7% by month with the drawdown level of 52.14% which is actually very good.

In this case, we should not be afraid of the 50% drawdown, because, on the other hand, the advisor also shows a high level of profitability, which in relation gives us the right to talk about FXHelix EA as the profitable and stable EA.

The trading logic explained on the developer’s website is quite precisely displayed in the trading activity of the EA. There are very rare times when the lot is increased in this system. It looks like the advisor uses not typical Martingale strategy with a floating lot rising.

Still, the advisor increases lots slightly sometimes but here's what the developer says about it on the FXHelix EA website: “FXHelix in 90% of cases trades without Martingale (increasing of lots), but in rare cases, it may slightly increase lots to achieve profit”.

Analyzing the charts on MyFxbook I convinced myself that it is likely to be the truth. On the chart below you can see that most of the lots are fixed 0.40 (basic lot size) and then sometimes it happens to rise. At first glance, it could seem like "random" increases which are not actually true. The system opens a grid of the orders (sometimes just two orders) and in some cases according to its logic increases lot size slightly. Mostly the increase is as small as 0.01 – 0.02 but in some rare cases, the EA can rise it to 1.05 or even 1.92 as you can see on the chart. 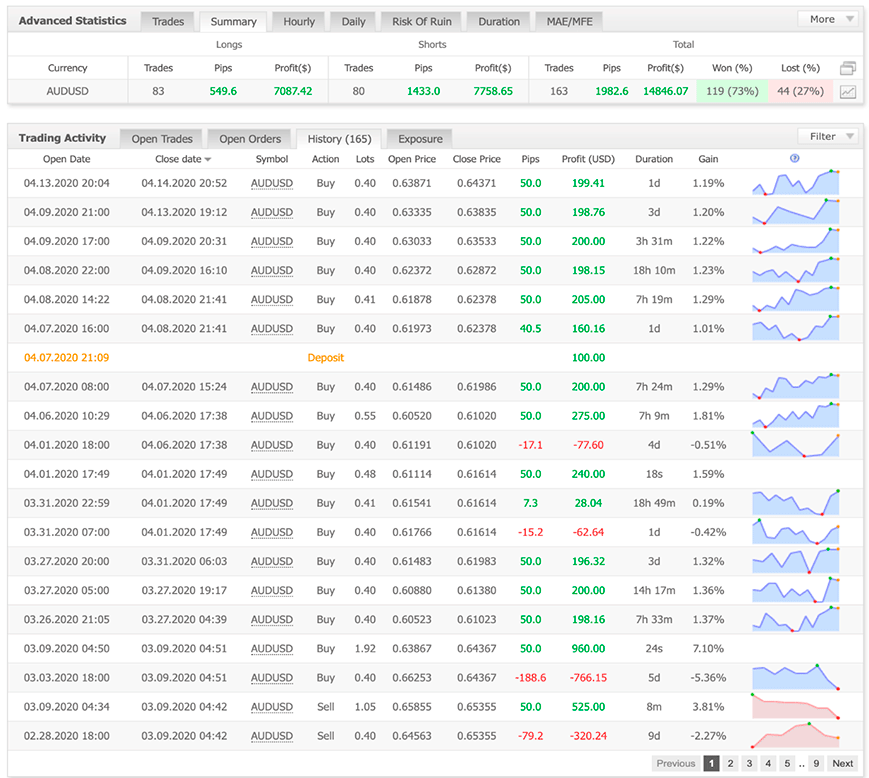 The EA uses some semblance of a grid in its trading logic but it seems to be some kind of non-static grid that opens new orders regardless of the number of points between them. It is clearly seen if to analyze the history of the transactions. There is no static number of points on the market needed to be passed for the next order to open. Perhaps, the system might be using some other way to set the grid.

Through the historical statistics, the basic starting lot size obviously has risen from 0.10 to 0.40 which could be a consequence of the improvements and corrections in the risk management of the system. Compare the following charts.

In most cases, there is a fixed take-profit of 50 pips which seems to be good for trading using this strategy. As history shows the EA managed to be profitable through some time almost without long deep drawdowns (not taking into account the deep 52% drawdown that we discussed previously).

But there is a possible problem for those who expect the system to bring fast money. The take-profit of 50 pips causes some of the trades in rare cases to be opened for period from 14 to 30 days (or in some rare cases even longer) but it seems that this fact hasn’t been preventing the system to bring profit.

FXHelix EA shows stable results in the number of trades by day. It's very clearly seen from the chart above that the system on average opens 1-2 transactions per day. Sometimes there could be days without newly opened transactions but it happens approximately 25-30% fewer times than the openings.

As mentioned, it opens only 1-2 transactions in a day at different moments which is in some way confirms another statement of the developers: “Our Forex robot analyzes the history of price movements to notice a price movement that goes against the expected average movement on a currency pair. Based on this data, the EA makes a decision about opening a trade and its direction”. This conclusion

At the same time, the advisor is very likely to close trades in the period from one to 14 days which confirms the statement of the developers on the official website: "FXHelix is not a Scalper and not an Arbitrage EA, which makes it compatible with any MT4 broker”.The duration of the trades before closing trajectory is clearly seen in the chart above.

Thinking about FXHelix EA as about the quite profitable system is the right way to define the EA but before purchasing it you have to be aware and ready to face the risks the system proposes. And the risks are high as well as the profitability is. The good thing about it is that you are able to control the risks and it will determine the level of profitability of the system.

FXHelix shows pretty strong statistics on the live account through almost two years of trading which gives us the reason to call it secure and stable. Of course, we also should not forget the previous really deep drawdowns that have taken place in the FXHelix's trading history. To avoid the destroying of your account with this system it is vital to follow the recommended settings.

If you are going to rise the risks or the lot size for the possible rise of the profitability level you have to realize the possibility of your account being destroyed. If you're good with it go ahead and if you prefer a safe way of trading just follow all the recommendations.

Also, you have to be ready to wait if you’re going to use this system. Sometimes transactions may stay open for a long time that can reach 14-30 days, and in very rare cases even more. But this should not scare you because exactly this way the system achieves stable performance which is proven by its live results.

So let’s finish this review by giving appropriate assessments to the FXHelix based on the analysis of its work, statistics, and other factors
Price VS Quality
5/5
Profitability / Drawdown
4.5/5
Statistics duration
5/5
Backtests
4.5/5
Authors’ rating
4/5
AVERAGE
4.5/5

And here goes a small explanation of the marks I gave to the EA. In my opinion, the price is more than suitable for this EA considering that the system has all the tests, good live statistics, and (what is most important) has a history of two years of successful work on the real account.

I gave 4.5 stars to the drawdown/profitability ratio because in the history of its work the system has faced a few deep drawdowns which I can’t ignore even though the results are still good.

As mentioned before, the statistics duration of the FXHelix is around two years which is more than enough to say that the system is stable. Here you have 5 stars out of five.

Backtests. Talking about backtests I think it could have had a longer period to test on. So 4.5 out of 5.

My own opinion of the EA. I consider the system to be good, stable, and profitable but I give it 4 stars out of five because not everyone may like the trading system that may keep open orders on the market for up to 30 days. It does not mean that this fact destroys everything about this system but the fact remains and so I give it solid 4 stars out of five.

At the moment of writing this review, the automated rating system of the ForexStore rated this EA 9.5 points out of 10 which for me looks a bit overrated but still very close.