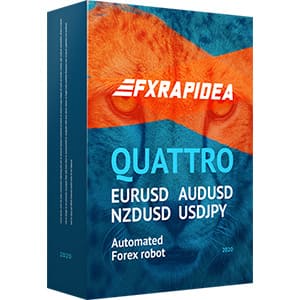 It's time for a review on FXRapidEA which is one of the latest EAs that’s been represented on ForexStore. The main features of the Forex robot characterized by the developer are that the FXRapidEA does not trade against a trend, it is highly profitable, it trades rapidly and it compatible with all brokers. Let's go deeper into the system's statistics and see if it is true and what's the benefits and weaknesses of this Forex robot.

FXRapidEA has two different versions with live accounts named FXRapidEA Quattro and Due. The difference between the accounts is pretty easy to determine. There are two currency pairs (EURUSD and NZDUSD) which are available for both Quattro and Due versions to trade on. At the same time, there are two more currency pairs (AUDUSD and USDJPY) that are available only for the Quattro version. FXRapidEA Quattro is able to trade on one, two, or even four currency pairs at the same time. Both versions are showing a great gain level but for this review, I will be more focused on the Quattro version.

Together with the live statistics on the Myfxbook official page, we can also see eight backtests provided by the developer. Here we have two backtests per each currency pair that FXRapidEA works on.

Every currency pair was backtested on 35% risk and 100% risk which shows us how the EA could possibly behave with the different risk settings. All the backtests were made on the basic Myfxbook backtester on the 1H timeframe with 90% accuracy which is okay for this EA because it does not use scalping strategy and doesn't need the precise every tick data for its proper work. All the backtests were made on the three years period quotes data from 2017 to 2020 which is not that bad but it could have had a longer backtesting period for at least two or three more years.

Live statistics of FXRapidEA start in December 2019 with the initial deposit of $2000 and we see that it has collected 1039% of gain since then which is very impressive results that prove developer's statements about the rapid nature of trading of this EA. Here we see the average monthly growth of FXRapidEA which is 47.16% per month that also looks really high.

At the beginning of the curve, we see the smooth upward move almost without the drawdowns and losses but things began going a bit worse in April 2020. At this point in the review let's look closely at the drawdown level of FXRapidEA.

The numbers taken from the statistics say that the average drawdown level of this Forex robot is 40.74% which feels high for me. But if analyzing the statistics, we can see that this number is actually the peak drawdown value ever reached by this EA (look on the screenshot below).

Taking into account the fact that FXRapidEA has quite a high gain level it is worth saying that the drawdown level of 40.74% should not scare us at all since the profitability/drawdown ratio, in this case, is quite impressive. It is actually around 1:1 which should be considered as a highly profitable trading system.

The drawdown level itself could look really high for some traders but it is important to look at this in the correlation between profitability and drawdown. In this case, we see that 1:1 ratio is very good and even if we would have lowered the risk by half, we still should have gotten around 20% drawdown level together with around 500% total gain level which looks pretty high ratio including only 7 months period of work.

Analyzing the trading charts of FXRapidEA it is hard to say what exactly is the trading strategy of the system. The developer says that the robot trades only by the trend and never against it. That's why it programmed to close the trades even in the loss if they are not following the trend.

As we can see from the graph below the average duration of the open position in the market for FXRapidEA in 80% of the cases would not be longer than 2 days. That is the point where we really see the rapidness of the system. And still, not even holding trades long, the profitability of the system is quite high.

The system makes something around 42 trades per month which means that it doesn't have a day without trading. It probably uses some kind of modified grid patterns but at the same time, it is not true to say that FXRapidEA is a grid system since it closes positions according to its own special algorithm and does not consistently build the grids to close them by take-profit. Also, the system does not raise the lot size constantly. Sometimes lot sizes vice versa decrease during the building of some-kind-of-grid patterns which is totally not consistent with a martingale grid strategy (look on the chart below).

Statistically, the FXRapidEA is a highly profitable Forex robot, that shows a high level of both gain and drawdown which in the ratio looks reasonable and logical. At the same time, we have to admit that the EA has got not only upward moves of the trading statistics. On the Myfxbook account, we see that the system encountered some falls and losses during its trading which is also should be connected to the trading logic of the system, especially to the fact that it closes the trades that are considered to be not following the trend. But all the losses yet again have been recovered according to the strategy logic except once. On May 19, 2020, the EA has encountered a stop-loss on once which wasn't done according to the trading logic of the robot but by the risk level set by the owner of the account.

Still statistically having one stop-loss in 7 months and this high profit the system is also looking reliable. But it still needs to work for a longer time to consider it to be highly profitable and reliable at the same time.

We also have to admit that there are a number of pros of the EA such as compatibility with any broker, NFA regulated brokers, and brokers with FIFO rule. Moreover, the developer promises 30 days money-back guarantee and claims the EA to be designed in such a way, so that you can get the same results as on the developer account. Also, the EA has got one of the main ForexStore achievements which verify that the refund policy is protected not only by the seller but also by the ForexStore market.

In the end, it must be said that the EA has got a risk limit system which is helpful for traders to set the risks lower but in this case, the amount of the initial deposit then should be higher to produce the same rapid trading. And this is the point of this EA – not that much about total safety (still the EA copes pretty well with the losses and security of the account) but more about the rapidness.

So let’s finish this review by giving appropriate assessments to the FXRapidEA Quattro based on the analysis of its work, statistics, and other factors
Price VS Quality
4/5
Profitability / Drawdown
5/5
Statistics duration
3.5/5
Backtests
3/5
Authors’ rating
4.5/5
AVERAGE
4/5

Explaining the final marks of this review I start from the price and quality ratio mark where the EA has got 4 out of 5 which for me looks more than okay for this Forex robot. The price for FXRapidEA is not higher than average but I can't give it the full mark because of the stop-loss that took place in the history of the accounts. Still, as for me the quality of the robot is acceptable and deserves its price.

As mentioned in the review the drawdown/profitability level of this EA is actually pretty impressive. It almost reaches a 1:1 ratio which is very good. That’s why FXRapidEA got 5 out of 5 for this.

The live statistics of this Forex robot have held its history for 7 months already which is good but not the perfect period. I consider EA statistic duration to be perfect if it has 12 months or more of the trading history. So here we have 3.5 out of 5.

My own thoughts about this Forex robot are mostly positive. I like the way it works for fast profit as well as the profitability/drawdown ratio of 1:1. But also, I'd like to see if this EA will be that profitable in the longer periods.

I would say that the advisor is interesting and profitable. So far, for half a year there has been only one stop-loss on each of the versions of the FXRapidEA and the profitability covers the losses with a large margin. Due to the drawdown/profitability ratio, the risks could be set quite low and at the same time, there still would be a decent performance. If in the future everything continues in approximately the same way, then the system will also recommend itself as reliable.

At the moment of writing this review, the automated rating system of the ForexStore rated the Quattro version of the EA 7 out of 10 and Due version has got 8.5 points out of 10 which for me looks like honestly deserved mark.