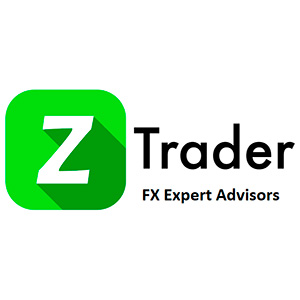 No experience? We got you covered. Our support will help you to install the Forex robot on your platform. 100% automated FX EA.

We keep you updated on the latest changes without extra charges and will send you our latest modified forex robots.

No scalping, no averaging

ONE SOFTWARE ONE PAYMENT

If you want to select settings you can do it. The trading account should be no less $100-$200.

Fixed lot size - No martingale - Compatible with any broker

Professional default money management settings or adjust them yourself. Fine tune your forex robot the way you like it.

We keep you updated on the latest changes without extra charges and will send you our latest modified forex robots.

Here is a review of Z Trader EA – the Forex robot that has high results on the live trading account as well as backtests, 24/5 support, and many more. Read the following review to see all the pros and cons of the robot.

The Z Trader EA has got one live trading statistic from the third-party company FXBlue. There are no Myfxbook accounts registered by the developer of the system. The robot trades on EURUSD currency pair and, as it is seen, the statistics have a pretty long history but eventually, the real trading started on the account not long ago. First orders were executed only in June 2020 which gives us 10 months of live trading to analyze. Although, Z Trader EA has statistics only on the FXBlue platform, which makes analysis much more complicated because FXBlue has a slightly weaker account verification system, we still can see a lot from the numbers represented there.

There is only one backtest of Z Trader EA available which has been made on 2 years of the historical quotes (2016-2018) on 15M timeframe. The developer made backtest on the basic MetaTrader backtester with 90% accuracy using every tick data which might be necessary for the EA to work correctly. The backtest shows stable and constant growth which confirms developers’ statements about the nature of the EA.

At the first glance on the official website of Z Trader EA, it is clear that the team standing behind has no clue how to use WordPress themes properly or how to manage the website development for the product’s page because the website poorly put together having a lot of mistakes in texts and more. This, in some way, might show developers’ attitude towards the whole project including the communication with the customers and the efficiency of the robot, as you’ll see in this review.

The developer claims that Z Trader EA has been made as a result of 1 year of hard work. There are only one live trading statistics on FXBlue and one backtest available for this Forex robot to prove developers’ claims about the profitability and efficiency of their product. The total numbers on the account could look impressive but they actually need to be broken down.

There are 18,442 of profit has been made during the trading period of the robot but the fact is that these numbers are taken in RUB currency which means the actual EUR equivalent is only 205 euros. At the same time, the official max drawdown is just 6.1% which would be an amazing result if not for the fact that there is a floating loss of -40,666 on the account which is more than 60% floating drawdown. These numbers as well as the screenshot below are taken from the official FXBlue account of Z Trader EA. 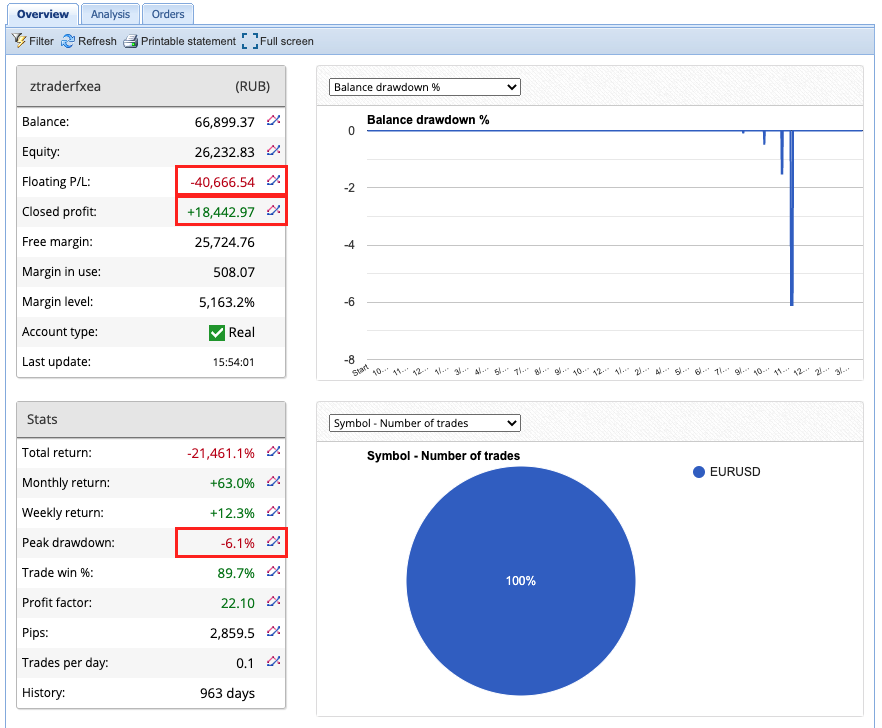 The floating loss mentioned previously is actually the series of open orders that have never been closed and now they are in loss with more than 60% of the money on the account. The first order of this unprofitable series was opened on May 28, 2020, and now it has a 901 pips loss. The whole series consists of 11 orders opened during the last 11 months and cumulatively have - 40,635 RUB. The chart below shows the official numbers from the account. 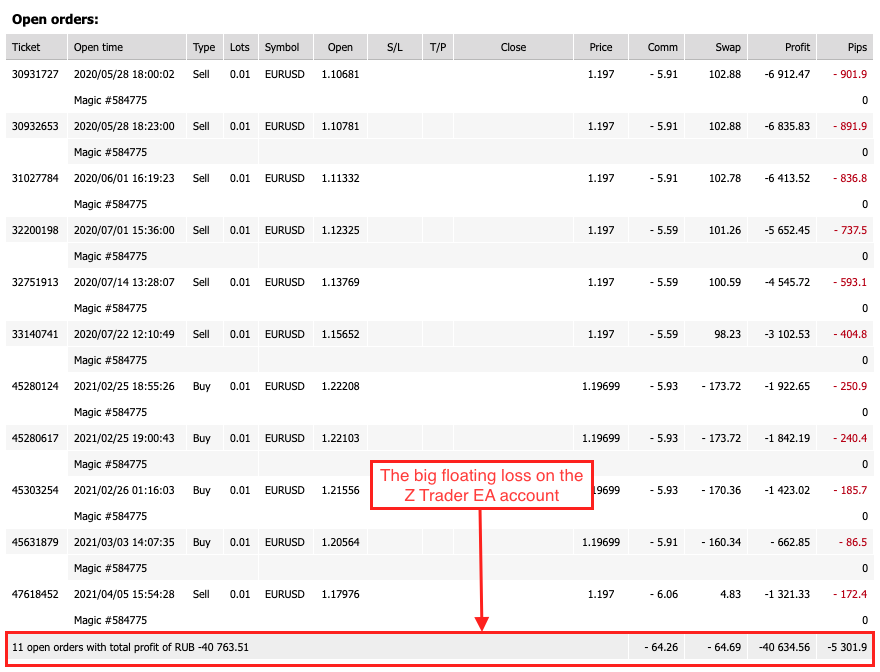 Moving forward to analyzing the trading strategy of the EA we face the problem that there is almost no information about the trading methods or any clues to the strategy of the robot provided by the developer. The only things that claimed are that Z Trader EA does not use scalping or averaging as well as Martingale method while using fixed lot size for the trades. But looking at the official numbers and trading activity of the robot it is possible to make some assumptions. As we can see from the following screenshot the EA in some way close to using grids with the fixed lot size of 0.01 lot.

Z Trader EA has made 116 trades in 11 months which is approximately 10.5 trades per month. This speaks up about the nature of the robot as not frequently trading EA. The longest trade duration is 3219 hours (135 days), and the average trade duration is in range from a few hours to 13-15 days.

Even though the EA has really good-looking live statistics there are many pitfalls that can be easily discovered if only we dive deeper into the analysis of the live performance of Z Trader EA. The biggest of them is the huge floating loss that’s been already open for 11 months with more than 60% of drawdown right now.

There is no information about who are the developers of the EA and what the exact trading strategy built into the robot that’s supposed to bring the customer profits. There is only a poorly developed website with the minimum information about the product and a lot of negative comments about the service and the quality of the system.

But, at the same time, there are positive live trading statistics and backtest available for everyone. The developer also promises a 30-day money-back guarantee and quality support as well as lifetime updates for their customers.

So let’s finish this review by giving appropriate assessments to the Z Trader FX EA based on the analysis of its work, statistics, and other factors
Price VS Quality
3/5
Profitability / Drawdown
2/5
Statistics duration
4/5
Backtests
3.5/5
Authors’ rating
3/5
AVERAGE
3/5

I give 4 out of 5 stars to price to the quality comparison of Z trader EA. The robot has 1 backtest, live trading accounts on FXBlue, and some other features that make it look attractive. The price for the robot is not high at all but there are a lot of things to improve for developers.

The profit to drawdown ratio of the robot is not that good especially because of the huge floating loss that’s been growing on the account for 11 months already. The EA has not made big profits as well and still has a big problem managing the losses, so I give it only 2 of 5.

The Live trading history of Z Trader EA has 11 months which is good and enough to get 4 out of 5 stars. It is one of the crucial factors that shows the reliability and efficiency of the trading system. There are also 2-years long backtest that shows a perspective of the trading with the system. But the backtest might have been longer than only two years, so I give it 3.5 out 5 stars.

I give this Forex robot 3 out of 5 stars. I don’t think that this EA is too bad because it still can bring profit as we can see from the developer’s account. But also, I don’t appreciate the fact that the developer gives such a small attitude towards the system. There is a lot to improve and reimagine for the seller, and I hope it will be done.

At the moment of writing this review, the automated rating system of the ForexStore rated Z Trader EA with 7 points out of 10 which is quite close to the marks that I've considered after review of this Forex robot.