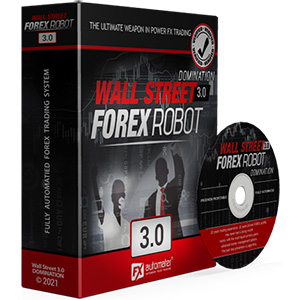 With Wallstreet Robot 3.0 - We've kept the best elements from the proven, core trading principles of Wall Street Forex Robot v1.0 and v2.0 - and taken its functionality to a whole NEW LEVEL. As always, our focus is mainly on achieving realistic returns, based on current market conditions.

For the first time you have a robot who can use a REAL insiders only Money flow information. With our brand new "Market Bias" tool we've managed to extract the most accurate information, about the market bias of the BIG, SMART institutional money. Finally, with Wallstreet Robot 3.0 you can use this unique tool to filter your trades in the direction the SMART MONEY are looking for.

We've designed a first of its kind "Broker Spy Module". We spent over 2000 hours in developing and refining this powerful tool with one primary goal - to protect your capital and you from unethical brokers: cheating you with high negative slippage, high spreads or delayed order execution. Now you will be able to monitor every minute whether your broker is stealing from you.

We've also built a revolutionary, industry-first: REAL-TIME-Settings Update System. You don't need to restart your robot to get the new settings anymore - you can decide how often the EA will check for new settings. You have the option to automatically download and apply the latest optimized settings directly from our servers.

For the first time you have a robot who can use a REAL insiders only, Money flow information.

With our brand new "Market Bias" tool we've managed to extract the most accurate information, about the market bias of the BIG, SMART institutional money. Finally, with Wallstreet Robot 3.0 you can use this unique tool to filter your trades in the direction the SMART MONEY are looking for.

We've designed a first of its kind "Broker Spy Module". We spent over 2000 hours in developing and refining this powerful tool with one primary goal - to protect your capital and you from unethical bro- kers: cheating you with high negative slippage, high spreads or delayed order execution. Now you will be able to monitor every minute whether your broker is stealing from you.

100% SATISFACTION MONEY BACK GUARANTEE. Try WallStreet Forex Robot with NO RISK for 60 days!

WallStreet Forex Robot 3.0 is the system that’s been on the market for 10 years already and has a big fan base. In this review, let’s figure out the efficiency of the robot’s latest activity and see the pros and cons of the EA.

Wall Street Forex robot has 9 more active trading accounts, but all of them are demos. We are convinced from experience that demo results should not be considered because many systems are capable of working exclusively on demo and cannot show the same results on real live trading. Therefore, we only review real accounts of Forex robots.

In the beginning, it is worth mentioning that the 3.0 version of the WallStreet Forex robot has appeared because of the crash of the first version of the robot that's been out since 2011. There is no information available about what happened with the previous version, but I assume that the system just crashed and never recovered from the loss.

The Forex robot has gained 185.25% of profit during 43 months trading history and has an average of 2.49% of monthly profit. At the same time, the deepest drawdown on the account that’s been fixed by Myfxbook is 21.17%. Considering those numbers, we can calculate an approximate profit/drawdown ratio, which is 0.12:1. This is not that high number, and we could not call this system a highly profitable one so far.

Looking at the graph above, we can see that the WallStreet Forex robot has been struggling to keep the straight upward curve movement as there are a lot of sharp up and down movements. Still, the system has not got long drawdowns and has managed to grow an account by 185.25%.

Obviously, the WallStreet Forex robot does not use compound interest, as there is no lot size growing through the trading history of the system. The EA uses a fixed 0.05 lot size and acts a lot like a scalper that wants to seem not that aggressive. If we turn our attention to the trading activity chart, we’ll see that the system takes something between 3 – 10 pips of the profit, which is the main reason we can call the system scalper. 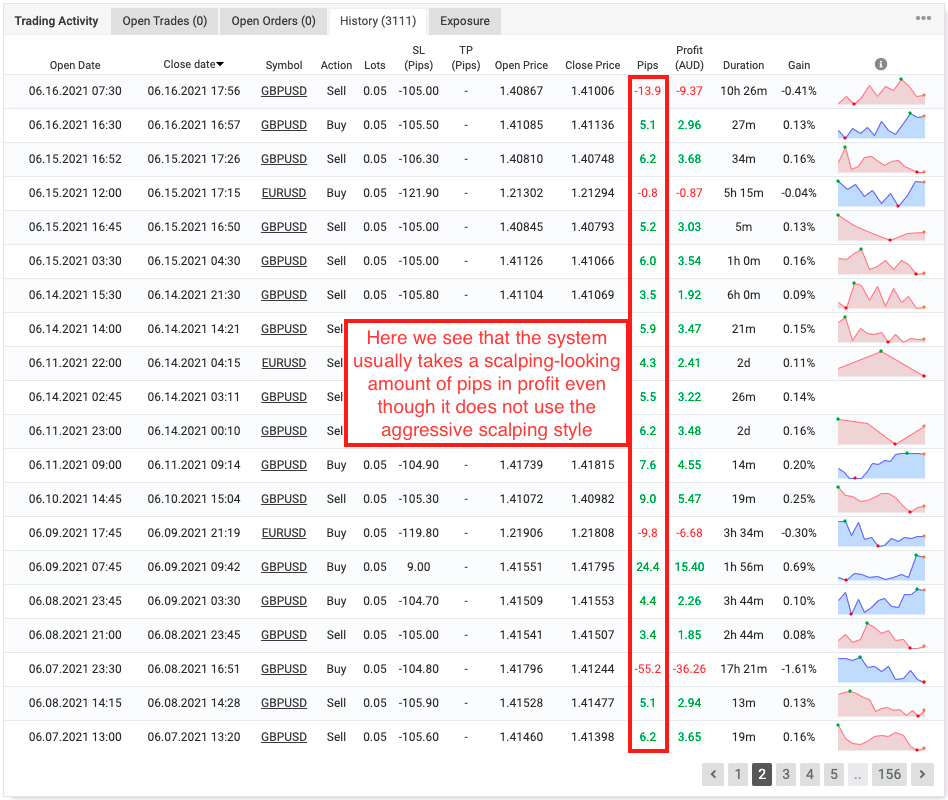 Another trading activity chart also confirms the statement about the scalping nature of the WallStreet Forex Robot. As we can see from the chart above, the system has already made 3110 trades since December 2017. This means that the WallStreet robot has been doing an average of 72.3 trades per month or more than 2.4 trades per day, which is obviously speaking up about the scalping nature of the robot.

The average duration of the trades on the account is between 4 minutes — 6 hours. Statistically, if the WallStreet Forex robot holds the trade opened for longer than 3 hours, it is most probable that the trade will become a losing one. This can easily be seen from the trade duration statistics on the Myfxbook account of WallStreet EA on the screenshot below.

At the end of the day, the WallStreet Forex Robot is one of those systems that have all the features and potential to get viral, but still just remains an ordinary one. First, it is due to not the best trading results that the system was showing through the years. The second big problem is the “reincarnation” of the system after the crash of the first version of the WallStreet robot (that’s why now we have the WallStreet 3.0). And the third is that the system uses scalping as the main trading instrument, which nowadays is not the popular trading practice.

So let’s finish this review by giving appropriate assessments to the WallStreet 3.0 based on the analysis of its work, statistics, and other factors
Price VS Quality
3.5/5
Profitability / Drawdown
2/5
Statistics duration
5/5
Backtests
5/5
Authors’ rating
3/5
AVERAGE
3.5/5

It’s time for final marks. I gave the WallStreet Forex robot 3.5 out of 5 stars for price vs quality stats due to the developers’ efforts to make this EA profitable and attractive but still, there is a lot to improve in the trading of this EA which does not give me a possibility to higher the mark.

The WallStreet robot gets 2 out of 5 stars for the profitability to drawdown ratio stats. The average ratio of 0.12:1 that we calculated based on the numbers taken from the official Myfxbook statistics of the system does not give me any chance to give a higher mark.

The system gets 5 out of 5 stars for both statistics duration and the backtests. Wall Street has got 43 months of live trading recorded by Myfxbook and more than 20 years long backtesting period, which is more than enough to get the higher marks.

My personal assessment of this Forex robot is 2 out of 5 stars. The system does not show a great profitability/drawdown ratio and uses not a very successful scalping strategy, which together with the knowledge of the potentially previously busted account does not allow me to give it a higher mark.

At the moment of writing this review, the automated rating system of the ForexStore rated WallStreet 3.0 Forex Robot with 5.8 points out of 10 which differs a little from the marks that I gave in this Forex robot review. This might be due to a few factors that include my opinion on the system.
I hope this helps you, traders! I wish you profitable trading and luck on the market!