FXZipper is a Forex Expert Advisor which is based on scalping strategy. That means, the EA earns a small amount of pips from each trade. This allows the EA not to keep orders in the Market for a long time and close them in profit. Unlike most other scalpers, FXZipper is not a toxic scalper and is friendly with any broker. Our scalper earns on average 6-12 pips per trade, and keeps trades in the Market on average from 15 minutes to 3 hours. This primarily makes it profitable not only on demo accounts (unlike many other scalpers), but also in real trading on our account and on our clients’ accounts. Also, thanks to such qualities of FXZipper, your broker will not mind if you trade with this scalper.

Algorithms of FXZipper robot are quite universal, which allows it to work on as many as 8 currency pairs: AUDUSD, AUDCAD, USDCAD, GBPUSD, GBPCAD, GBPAUD, EURCHF, EURCAD.

There is a special technology implemented in the EA, that allows to postpone opening of a trade by signal if it has become unprofitable due to a sharp price increase, requotes or a fleeting increase of spread. A trade will be opened either when the price is best for its opening (in order to earn maximum profit), or the EA will deliberately miss a low-profit trade. This feature can be enabled or disabled in the settings of the EA.

FXZipper EA is the newest Forex scalping robot that is developed to make a difference in scalping trading. FXZipper EA has been programmed to work with almost every broker and to seek only the most profitable trades, sometimes skipping the ones that could be unprofitable. In this review, we are going to break down all the features and disadvantages of this Forex robot.

FXZipper EA has got one developer’s real trading account on Myfxbook which works live since November 22, 2019. It works on all the eight currency pairs it is developed to work with and shows itself well. At first sight, the trading chart of the account looks a bit sharp but having a few downward moves but still, the main trend is up which has led to more than 120% of profit reached during the trading period of the EA.

Developers of the FXZipper EA made sure that their trading system would be properly backtested. As we see there are 9 backtests available for the FXZipper EA. The robot was backtested by the trading simulation on every currency pair that it can work on. Moreover, there is one more backtest for the AUDCAD currency pair which shows different ways of trading by this Forex robot.

All the backtests were made on 5 years of historical quotes from 2015 to 2020. Backtests were made on the basic MetaTrader backtester on the M15 timeframe with 99.90% accuracy because the EA uses a scalping strategy and needs the precise every tick data for its proper work. As we can see from the statistics the EA showed itself very stable and constant.

FXZipper EA has got only one live trading account on Myfxbook that begun its trading in November 2019. Live trading stats of the robot are positive so far and show a bit sharp upward move.

The first thing that catches the eye is the drawdown level of the FXZipper EA which is equal to 13.33%. This is actually a very low index for the trading robot that makes 120.43% of profit in 15 months which speaks up about the nature of the EA that is represented here (look at the screenshot below). The robot has been working live since November 2019 which is enough to make some decisions about the reliability of the advisor in the long-term perspective.

As we can see from the graph, there was no deep floating or closed drawdowns during the current trading period of the robot. The average monthly profit level of the EA is 5.82% which together with the low drawdown level looks like a safe and quite profitable Forex strategy at the same time.

The average profit to drawdown ratio level of the EA according to the trading results that it has been showing since November 2019 is 0.65:1 which is okay for the scalping trading strategy such as FXZipper EA.

As it’s been mentioned before, FXZipper EA is a scalper, which means that this robot does not keep trades open for a long time. The main idea of this strategy is that the robot takes a small amount of profit from every trade by closing them in a short period of time. The profit is accumulated not by the size of trades but by the number of profitable trades.

It is easy to analyze the duration of the trades of FXZipper EA by looking at the screenshots below. Those stats are taken from the real trading account from Myfxbook and show a straight trend of closing trades in the range of 1 minute to 14 hours.

At the same time, there is one more obvious trend in the chart below. Sometimes the FXZipper EA keeps trades open for a longer period – from 2 days to 2 days 10 hours. Most of those trades are profitable which means that this is a preprogrammed strategy and not the problem of the system.

The way FXZipper EA manages the duration of the trades makes it profitable not only on demo accounts but also in real trading. In most of the cases with scalpers, the way they make fast 1-minute (or even shorter) trades is impossible in real live trading because of different factors that influence this process such as brokers’ rules, the difference between price changing speed, and the execution of the order, etc. This way FXZipper EA makes a difference by closing trades in a longer period of time so that the trades execution speed, margin level, and other factors can’t influence the efficiency of the trading.

One of the main features of this Forex robot is that it’s compatible with almost every broker, which is not that often for scalpers. In most of the cases, scalpers use so-called “toxic” patterns that are frequently get blocked or simply are not allowed for use with certain brokers. But, as a developer declares, FXZipper EA is friendly with any broker that has narrow spreads. Mainly, this is so because of the lot size of trades. “Toxic” scalpers usually take 2-3 pips per trade which is too small for most of the brokers. On other hand, FXZipper EA takes an average of 7-10 pips per trade (look at the screenshot below). 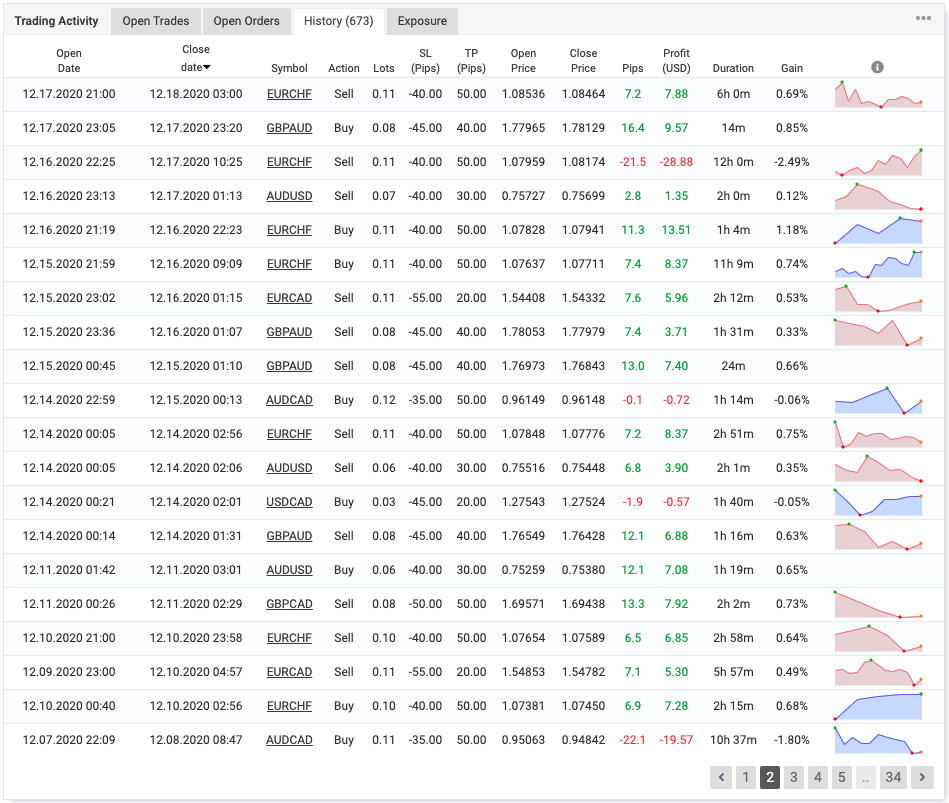 The developer of the FXZipper EA added some special features to the robot to make it safer and more profitable. For example, there is some postponement option that can be enabled if needed. The developer explains the features of the option this way:

“There is a special technology implemented in the EA, that allows postponing the opening of a trade by signal if it has become unprofitable due to a sharp price increase, requotes or a fleeting increase of spread. A trade will be opened either when the price is best for its opening (to earn a maximum profit), or the EA will deliberately miss a low-profit trade. This feature can be enabled or disabled in the settings of the EA”.

This Forex robot has all needed tests such as 9 backtests and 1 live trading account on Myfxbook. It trades on 8 currency pairs and has a positive profitable statistic for more than 15 months of live trading which is enough to make some conclusions.

FXZipper EA is a specific scalper that is allowed to work with almost every broker that has narrow spreads which is one of the main advantages of this system because it is neither one of the “toxic” scalpers nor the unrealistic profitable only on demo accounts robots.

The EA looks quite interesting and promising. The profit to drawdown ratio of the system is not that high but it was enough to make more than 120% of profit in 15 months. At the same time, the drawdown level of the system is only 13.33% which makes it safer for long term trading.

The duration and the lot-size of the trades of FXZipper EA make it to be compatible almost with every broker that has narrow spreads and to be profitable since the way of trade execution of the robot is acceptable and so not cross the live trading principles.

So let’s finish this review by giving appropriate assessments to the FXZipper based on the analysis of its work, statistics, and other factors
Price VS Quality
5/5
Profitability / Drawdown
3.5/5
Statistics duration
5/5
Backtests
5/5
Authors’ rating
4/5
AVERAGE
4.5/5

The FXZipper EA has a justified price for the quality of the product in my opinion. FXZipper EA has got profitable trading results so far, it has no stop-loses or deep drawdowns closed in a loss. It has backtests for each of the currency pairs it can work with. There are also a 30-days money-back guarantee and 24/7 support for customers. All this is enough to give a 5 out of 5 stars mark.

The profit to drawdown ratio of the live trading account of FXZipper is 0.65:1 which is not one of the highest on the market but it is totally enough to call it profitable and especially if considering a low drawdown level that provided confidence in the reliability of the system. So, I give it 3.5 out of 5 for this mark.

After the analysis of the FXZipper EA, my attitude towards this Forex scalper is quite good since I did not find any unacceptable things about trading or the results of this system. Moreover, all the features that are included in the purchase and the respective price for it are enough to give it 4 out of 5.

At the moment of writing the review, the automated rating system of the ForexStore rated FXZipper EA with 9.6 points out of 10 which is very close to those equivalent marks that I've considered after reviewing this Forex robot.