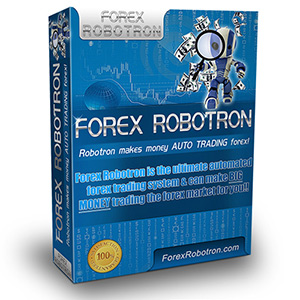 Forex Robotron EA is a popular Forex robot called “perhaps the best forex robot for automated forex trading” by its developers. In this review, we’re going to explore if it is true and how exactly this EA has to be described.

The developer gives us four different packages of Forex Robotron to choose from but the only difference between them is the number of licenses you get. At the same time, the price of the packages increases significantly from $299 to $999. So, before submitting Forex Robotron download check the developer’s website and decide for yourself what package fits for you best.

The EA has got three live accounts that have been running since April, May, and July of 2019. It seems like the main difference between them is the number of the currency pairs they are working on and the amount of the initial deposit on the accounts.

Here we have a statistic of 14 - 15 months of work available which could be a reason to say that the EA works more or less stably If not the small problem that maybe not everyone would notice. At the top of the Myfxbook pages of two out of three accounts, we find this small phrase that says "This account uses a custom start date - for full history analysis use the "Custom Analysis" tool”.

And that’s where we can see expended statistics (not the one that developer wants us to see) which actually goes not from May 2019 but starts in September 2018.

From this point, we see that the EA actually has got really huge losses in the period from September 2018 until May 2019 (where the "visible-for-all" statistics start).

At the same time, we can see from the charts that even though Forex Robotron has collected some profit in its trading and recovered from the losses it still had some serious problems going back and force in profit recently.

In Myfxbook history, we also can find several accounts that are not updating anymore. Different accounts stopped updating in 2018 and 2019 which gives us a strong reason to think that they have blown up. 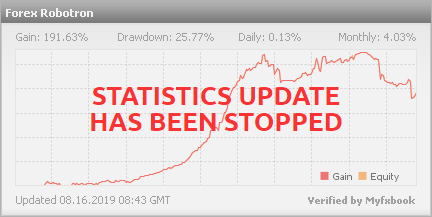 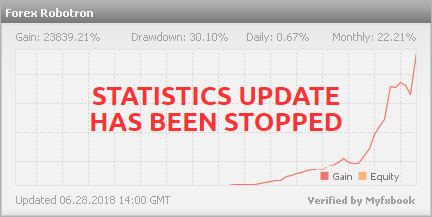 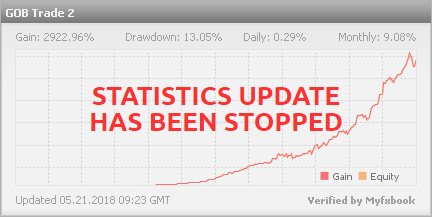 Another thing that looks really good about these backtests is the fact that the developer uses not the basic MT4 backtests that usually give only 90% of the accuracy but the custom one that gives 99.9% accuracy as you can see from the screenshots. It is a very important thing for the scalpers to include in the backtests because they usually take only a few pips of the profit and the real tick data gives much more realism to the results of the backtests.

As we can see from the statistics Forex Robotron is a scalper EA that is working on the 5-minute timeframe. It uses the compound interest to determine the lot size for the trades as we can see from the stats. During the trading of Forex Robotron the lot size has been changing a lot but starting from May 2019 it started stably growing from 0.20 lot to 2.10 lot (screenshots №1 – May 2019, and №2 – June 2020).

It is also an interesting fact that Forex Robotron hasn't performed any Sell trade since May 2019 which looks like a part of the new trading strategy of the EA.

It has to be mentioned that the kind of Forex robots like Forex Robotron is very sensitive to the broker they work with. The EA usually closes positions with the profit in up to 3-3.5 pips which is quite a small amount for some brokers. So, buying this EA it is important to understand that not every broker would accept trading with this EA.

Also, the usual issue with the scalpers is that they can quickly switch from the profitable trade to losing one. It happens because of the larger lots which they need in order to produce a profit with a small number of pips they close in profit. The drawdown level of the Forex Robotron only confirms this statement as we can see 51.03% of drawdown on one of the three Myfxbook accounts of Forex Robotron (screenshot is below).

At the same time, the drawdown level on the two other accounts is quite impressive. It is only 17.86% and 19.62% and still, the monthly gain on the accounts is 9.45% and 7.87% respectively which is good results. 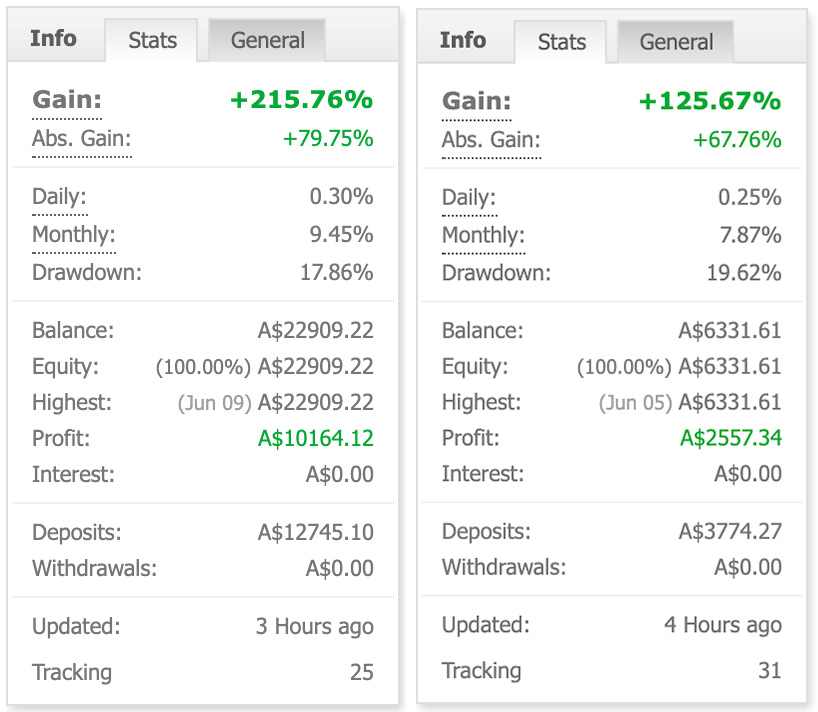 Taken together with an average of about 19 trades per month the profit\drawdown ratio looks normal. The EA does not make an incredible gain but the latest trades are mostly in profit.

Together with the live statistics of Forex Robotron EA I also checked the developers’ website which I took the backtests statistics from. And looking at the web page it is clearly seen that the developers haven't been changing anything there for a long time. The site looks very old-fashion and cluttered with the screenshots of the different kinds of statistics and so-called "testimonial" which are just comments from the “customers”.

After analyzing Forex Robotron's performance and history I see that the EA has got both good and bad times but it still works on its own level. It is definitely not the best EA I have seen but also not the worst one. The fact that Myfxbook statistics have a loss period together with the win period gives me a reason to admit that the statistics are real and the performance of the robot is not corrected manually. But the fact that some historical statistics were kind of hidden looks a bit negative for me because the visible statistics (that runs from May 2019) might confuse some of the inexperienced traders and would not show the whole picture.

So let’s finish this review by giving appropriate assessments to the Forex Robotron based on the analysis of its work, statistics, and other factors
Price VS Quality
3/5
Profitability / Drawdown
3/5
Statistics duration
5/5
Backtests
5/5
Authors’ rating
2.5/5
AVERAGE
3.5/5

Talking about the final mark I gave Forex Robotron 3 out 5 for price vs quality accepting developers’ efforts to make this EA profitable and stable but the fact of blown up accounts in the past and some kind of "hiding" of the full history of trading does not allow me to give a higher mark.

As mentioned in the review the profitability/drawdown level on two of the three accounts looks good but the 51% of drawdown on the third account and the huge losses during the history lower my mark to 3 out of 5.

The statistic of Forex Robotron live accounts have an acceptable period of 14-15 months (and some even longer) so here we have 5 out of 5. The same mark I gave to the backtests of the EA which was made using quotes for a long period and using every tick data.

ForexStore’s mark for this advisor is 6.6 out of 10 and it is quite close to the marks that the EA got in this review. Before ordering this EA it is important to understand the nature of the scalping strategy and to be ready for your trades to switch from profitable to losing quickly. Also, it is important to understand that the risks during the trading could be very high because of the higher lots. I recommend to contact the seller of this EA and to get as much information as it is possible before ordering this EA.

I hope this helps you, traders, and wish you profitable trading and luck on the market!

One of the only Forex Robots tested with real tick data, real variable spreads, real slippage & including trade commissions ($9 per lot, per round turn).

Forex Robotron - Real 4. This EA is a fast scalper and, most likely, the results are possible only on a limited number of brokers

Forex Robotron - Real 5. This EA is a fast scalper and most likely the results are possible only on this broker

How does it works?

Option for NO Trades Open Over Weekend

Tested Including Trade Commissions Of $9 Per Lot, Per Round Turn

Forex Robotron is the result of years of hard work day and night, programming, testing to develop a fully automated trading solution. Thousands upon thousands of hours of programming and testing has gone into the research and development of Forex Robotron.

What do you get?

1 to 5 Licenses For All Your MT4 Accounts

NO Hedging, Martingale, Grids or Arbitrage

Make Money Whilst You Sleep | Be Your Own Boss | Live The Dream!

Please kindly note there are no refunds due to the downloadable nature of the software.