Forex Fury software is the life’s work of our development team and it provides traders of all skill levels an investment opportunity that is both safe and aggressive simultaneously.

Low Risk Trading Strategy With A Drawdown Under 20%

Works With Any MT4/MT5 Trading Brokerage

The Forex Fury EA will provide traders with trades automatically in their Metatrader 4 platform.

Is it a one time payment?
Yes!

When do I get the product after buying?
Immediately. Check your email for your members area registration link to download Forex Fury.

Are there any upsells or membership fees?
No.

Who are the best brokers?
Try FXOpen or any low spread US broker.

What kind of support do you offer?
24/7, you will normally get a response within a couple hours during business days.

Is there a free trial?
No.

Why is the EA not trading?
Please be patient, it is rare but there can be days without trades. Open more charts, open more demo accounts (you have unlimited demo accounts).
Set MaxSpread to a higher number. Check your broker spread, if it is above 3, you will have to go into the expert properties and increase the max_spread. You can monitor your broker spread using this tool https://www.mql5.com/en/code/9492
Set MaxOrders to 1 also in expert properties. Some brokers only allow opening one trade at a time. This is the most common reason the EA isn’t trading.
On smaller accounts, set UseIncreamentalLotSize to FALSE, then set lot size to a smaller amount your broker will allow like .10 or .01.
Lastly, remove other EA’s you believe may be interfering.

Using brokers different from the accounts you are viewing can cause small differences, but nothing drastic.

Forex Fury EA is a well-promoted Forex robot that’s been out on the market for a long time. In this review, we’re going to go quickly through the main pros and cons of the advisor to see the real potential of live trading with this Forex robot

The developer of the Forex Fury EA provides statistics for three live trading accounts on Myfxbook: “Forex Fury Live GBPUSD (low risk)”, “Forex Fury V4 USDJPY", and "Forex Fury V4 EURUSD". The longest live statistics are available for the “Forex Fury Live GBPUSD” account. It starts on October 03, 2017, and has 48 months already. All other accounts have been live since December 2020, which is only six months of statistics. As we can see, the trading curves look different depending on the account but generally speaking, every live trading account has a strong upward movement trend which describes the system as a profitable one so far.

Forex Fury EA has other monitoring accounts, but almost all of them are demo accounts. We are convinced from experience that demo results should not be taken into account because there are many systems that are capable of working exclusively on demo accounts. Therefore, we only review real accounts.

There are no backtests available for Forex Fury EA. There are also a bunch of the demo accounts of Forex Fury EA available on the Myfxbook, but we’re not going to go through their performance in this review.

The developers of Forex Fury EA made a pretty loud statement right away. They claim that the represented robot is the most effective one on the market, and we are going to check if this is really true.

From the first glance at the live trading performance of the EA, it is obvious that the robot can trade accurately as we see the straight upward curve on the longest-lived trading account without long fixed drawdowns and big stop-losses. But this doesn’t mean that the system as profitable as it looks. Let’s explore the real numbers of the system using the screenshot below.

Forex Fury EA has gained only 85.22% of profit during the 48 months trading period, having an average of 1.41% of monthly profit. The drawdown level of the system at the same time is quite high — 41.90%. This shows that the systems’ profit to drawdown ratio is pretty small — only 0.03:1.

Two others real Myfxbook accounts of Forex Fury have better results, but the trading on those accounts began only 4 and 5 months ago. The account for the EURUSD currency pair has 48.13% of the gain, having an average of 7.27% of monthly profit with 17.84% of fixed drawdown.

The USDJPY account has slightly better results than the previous one. It has only 29% of the gain, having an average of 4.34% of monthly profit with 6.84% of fixed drawdown. These numbers give us an average profit to drawdown level of 0.4:1 and 0.6:1 respectively.

Let’s now turn our attention to the live trading stats to analyze the specific trading style of the EA and other trading particularities of the Forex Fury EA. The analysis is based on the “main” official trading account of the system with the longest live statistics.

As we can see, from the very beginning of the trading, the Forex Fury uses fixed lot size and places trades as grids. The most interesting part of this trading logic is that the grids are opened and closed all at once, which could be a signal of possible Martingale trading. 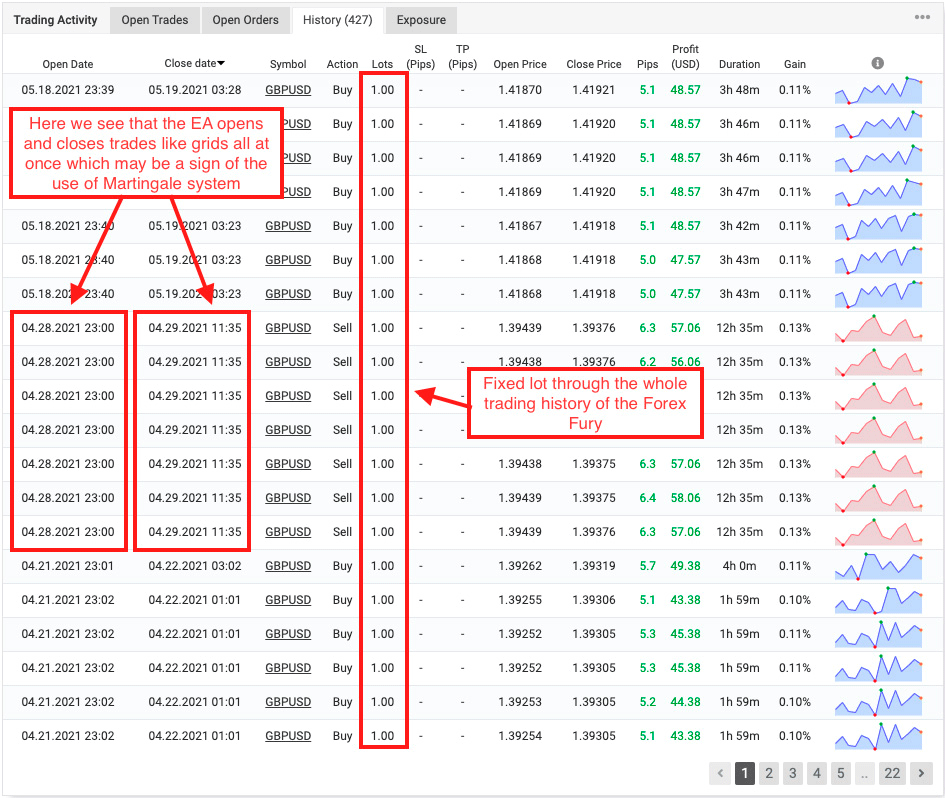 This trading logic might be one of the ways how developers camouflage Martingale’s lot size multiplication. That means that instead of opening a series of trades with an increasing lot, for example, 1st trade — 1 lot, 2nd trade — 2 lots, 3rd trade — 4 lots, and so on, the Forex Fury EA might be opening trades like this: 1 trade — 1 lot, 2 trades — 1 lot, 4 trades — 1 lot and so on.

The other interesting and at the same time not that pleasing fact about the trading of this Forex robot is that the EA has been trading since October 2017 which is 48 months of real trading. At the same time, as we can see from the Myfxbook statistics, there are only 25 months out of those 48 that the system has really traded for. All other time the robot was not making any trades.

There is no information about if the system was stopped during those 25 months or if it is just the way the robot trades but, anyway, this fact does not add up to the impression of the Forex Fury. If we turn our attention to the numbers on the screenshot above, we also can see that the robot made 418 trades during 48 trading months, which makes 8.7 trades per month. This is a small number, which is obvious in the view of the mentioned 25-months-inactivity fact.

The overall impression of the Forex Fury EA gives me mixed feelings. There are good potential trading results with the straight upward curve movement, but at the same time, there are a few shortcomings that make me think that maybe the developer does not give complete information and understanding of what the Forex Fury robot is actually all about. Well, let’s move to the final marks of this Forex robot.

So let’s finish this review by giving appropriate assessments to the Forex Fury based on the analysis of its work, statistics, and other factors
Price VS Quality
3/5
Profitability / Drawdown
3.5/5
Statistics duration
5/5
Backtests
0/5
Authors’ rating
2.5/5
AVERAGE
3/5

I give the Forex Fury EA 3 out of 5 for the price/quality indicator. The robot has a long list of live and demo trading accounts on Myfxbook which is good but still has no backtests and has many things to improve by the developer.

The profitability/drawdown ratio level of this Forex robot is not the best on the field, but still has all the chances to give a customer profit. The robot has 0.01, 0.6:1, 0.4:1 ratios which are too small to be called highly profitable. I give it a 3.5 out of 5 stars mark for this stat.

The Forex Fury EA has got 48 months of live trading as the longest real trading account, which gives it 5 out of 5 stars for this stat. Still, there are no backtests of this robot, so the system gets 0 out of 5 for this stat.

My personal attitude towards the Forex Fury EA is something between good and bad. I am not convinced that the EA is too bad because it can bring profit and has pretty normal trading results, but at the same time, there are many innuendos that make me think about the system in a bad way. So, here it has 2.5 out of 5 from me.

At the moment of writing this review, the automated rating system of the ForexStore rated Forex Fury EA with 5.5 points out of 10 which differs a lot from the marks that I gave in this Forex robot review.
I hope this helps you, traders! I wish you profitable trading and luck on the market!