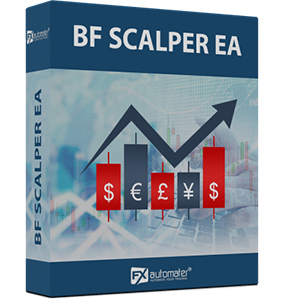 The logic is very simple but effective - BF Scalper EA uses breakouts of the Bollinger Bands for entry and exit signals.

Reasonable stop loss levels varies between 20 and 60 pips. You can use small fixed TP between 4-8 pips, or leave the exit logic to take care of the position.

The exit logic is also based on the BB indicator and it will close the trade even on a loss when the price is near or breaks the opposite BB line. This is commanded by the "BandBreakExit" parameter which works best from minus one to plus one-two.

The EA has high spread protection - this is crucial, because if you use limit orders as example you can't control this and you will take some trades with 10 or even 20 pips spread - one such trade will erase the average profit from 10 good trade as the best average expectancy of this type of trading is 2-3 pips in the best case. This is why we are not using limit orders.

Here are some optimization advises: