main / News
sort by:
sort by

The pound sterling fell to a two-year low

The pound fell to its lowest level since 2017, as the market again assesses the risk of no-deal Brexit for a transition period after bidders for the post of British Prime Minister increased their demands to revise Brexit conditions. Sterling was at its lowest level in the last two years against the dollar and reached a six-month low against the euro since the Brexit talks seemed to have become more hostile. Both contenders for leadership, Boris Johnson and Jeremy Hunt said that the so-called safety plan, aimed at avoiding the hard border in Ireland, which Brussels considers necessary, should be canceled.

After a strong start of the year, the pound is now on its way to become the worst currency in the G10. The new British Prime Minister will be appointed next week. Meanwhile, the Brexit deadline, postponed to October 31, is approaching.

The euro has reached a new intraday high on media reports that the European Central Bank is not yet ready to resort to additional monetary incentives when it will discuss this issue at a meeting this month. This, in particular, was reported by Bloomberg, citing an official who’s familiar with the matter.

ECB officials prefer to wait instead of a larger amount of data on the economic situation in the region. The Board of Governors may change its rhetoric and the text of the final statement this month to signal that the introduction of new incentives is inevitable, the source added.

EUR / USD jumped for 0.3% to 1.1321, but by lunchtime Tuesday it is already down. The ECB often uses a way to communicate with the market, such as transmitting information through anonymous sources, to see how markets react. 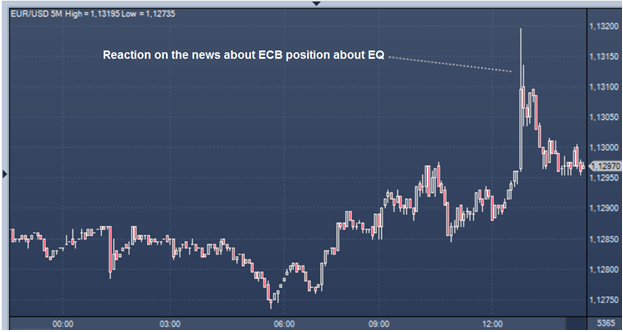 It’s time for USD to shine with a new power

Experts are betting on the growth of the dollar against the euro, pound sterling, and the Swiss franc. Central banks in different parts of the world signaled that soon additional stimulus will come amid expectations of a slowdown in economic growth and inflation. In the US, the market is expected to cut rates, perhaps even in July, which increases interest in the Fed's comments following the FOMC meeting on Wednesday.

Even though the reduction in interest rates reduces the attractiveness of the currency, the dollar looks quite stable against most of the major competitors from the Big Ten. Investment subsidiary of the banking holding company Well Fargo hedges potential risks by buying dollars. At the same time, the American investment company Invesco predicts the growth of the US currency against the euro, pound sterling, and the Swiss franc.

Experts from both companies are confident that economic weakness in Europe and China will not undermine the fundamental picture in the United States. Even if the US economy slows down, there will be no more attractive alternatives elsewhere on the planet. Therefore? There are no special incentives to reduce the shape of assets in the dollar.

In general, the concept of a dollar strategy is this: if other developed countries also face a slowdown and their central banks are also forced to lower rates to maintain economic expansion, the dollar will not have to depreciate much, even if the Fed rates are reduced.

The GBP/USD pair remains near 2-weeks lows around 1.2550 after the publication of the weak PMI data in the UK service sector. The pair continued to retreat from a monthly high of 1.2784 and remained under pressure for the third consecutive session on Wednesday.

Let’s recall that the pessimistic attitude towards the pound, associated with the fears about no-deal Brexit on October 31, worsened again yesterday. The cause of the worsening is the pigeon comments of the head of the Bank of England. Even a decline in the dollar index amid falling yield treasurers could not help the currency of Britain.

We’ll see if the pair will succeed in attracting buyers at low levels or it will continue to lose ground in the face of political and economic uncertainty in Britain. Meanwhile, the United States today will publish ADP data on private sector employment and an ISM business services index.

Beginning from the Wednesday morning (18th of June) there was an incredible bullish dynamic of the EUR / USD pair on the Forex market. The currencies rate rose from 1.1191 to 1.1405 and so gained 214 points, which was the highest from March 19. Before closing this week on Tuesday (25th of June) the pair consolidated on the 1.1406 rates and started a slow backward move.

Analyzing the graphics and making sell orders FXCharger MAX  EA managed to achieve a surge in trading accounts and to get profit from the bullish orders. It could perfectly determine a bullish dominant volatile market trend, successfully identified its volatility borders. We never mind on the short small sales that went to lose because of an important volatility breakout that has occurred and FXCharger MAX  EA didn’t miss it. It has taken the opportunity to gain 1586.69 of profit with 7.68 lots.