But Bitcoin bulls don’t need to be worried, and the reason why we state that is that the same factor of seasonality for July looks very strong. How strong are they? Well, the 5-year high percentage is 8.33%, which means that the Bitcoin price may rise to $ 9.208 this month.

“The hard times for bitcoin have passed”, said Dr. Zafar from Bithercash told me. His statement becomes even more prominent if you compare the current price of Bitcoin with the last years. The price of the crypto-king is now higher on a year-on-year basis and this is the first time in the past 8 months.

In the previous article on the crypto theme, we mentioned that the price has the ability to blast past the level of 10,000$ in one month. Not so long left for this to happen. However, the Relative Power Index shows that the momentum has slowed down significantly and the RSI has fallen below the critical level of 70. In order for the price to continue to move above, the RSI should adhere to the trend shown in the graph below. 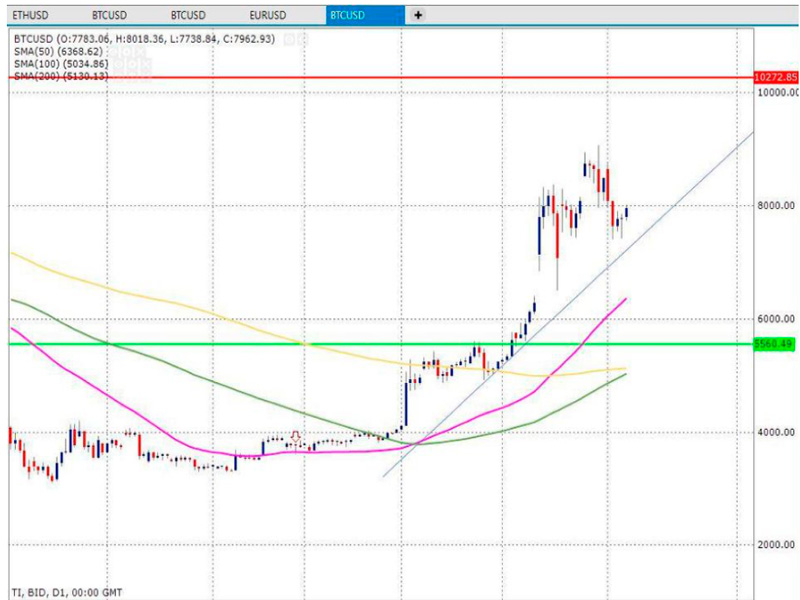 Even if the RSI drops below the trend line drawn up on the graph, this is not a big issue. In fact, it only sends a strong message: the price is too oversold. This will attract more buyers.

Don’t forget that the giant of social media, Facebook also intends to reveal its own cryptocurrency this month, GlobalCoin. Users will be able to process transactions through social media channels and Facebook employees will be offered the option to get paid in this coin. Facebook creating its own cryptocurrency will open up a huge commercial value in developing countries. It will be an entirely new paradigm.

Jon Crowcraft, a professor at Cambridge School of Computer Science, described this step as “Facebook turns into Silk Road 3.0”. The question is, how big can it get? Basically, we all know that Facebook controls our data and now, with its own currency, the company becomes unstoppable.

In conclusion, we’re optimistic about Bitcoin’s value this month and we believe that the Facebook event will be a catalyst for raising the price of Bitcoin. Facebook has to make sure that it has nailed all the free ends because it’s really a double sword edge. Any failure of the company is going to leave a large crypto space.

The widest range of the best forex robots on the internet (including EAs that trade Bitcoin) is up for every trader on our web site. Make sure you have checked out all the offers we have because there is a bunch of exclusive price offers that you don’t want to miss.